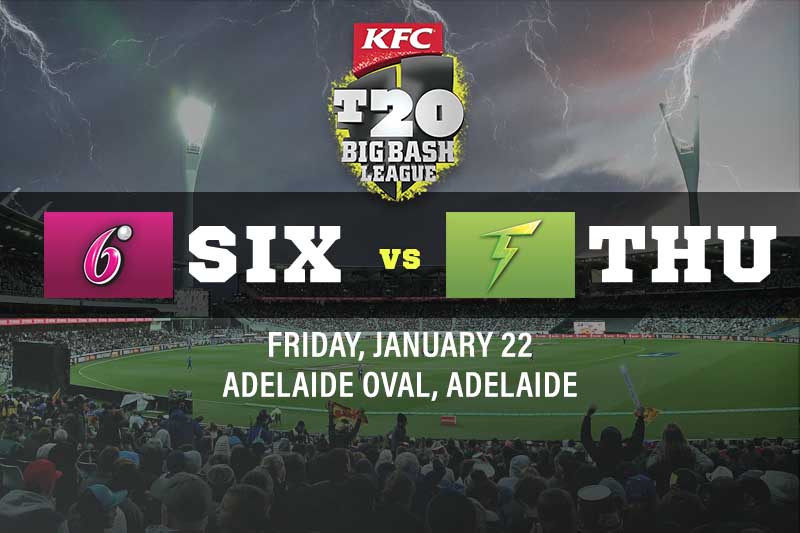 The second of two BBL10 games on Friday night sees the top of the table Sydney Sixers play host to the fledgling Sydney Thunder at the Adelaide Oval.

When the teams met on January 13, the Sixers gave their cross town rivals a bit of a touch in a rain affected affair when going on to win by five wickets.

Following their impressive win against the Thunder, the Sydney Sixers put together their third win a row when accounting for the Perth Scorchers by seven wickets on January 16 thanks to another Josh Philippe masterclass. He smashed 84 off 52 balls when putting on a 106 run partnership with James Vince for the second wicket and made sure the result was never in doubt.

Their cause was helped when the bowling attack limited the star studded Scorchers batting lineup to 7/163 thanks to another superb effort with the ball towards the back end of their innings.

Their opponent, the Thunder are on a downward spiral, losing their third successive game against the Hurricanes on January 18. The Thunder looked to have put up a competitive 5/177 after Sam Billings and Daniel Sams built on the start Usman Khawaja and Alex Hales put together.

The Thunder then unfortunately were on the receiving end of a Ben McDermott special. The Hurricanes keeper smacked the Thunder’s bowling attack to all parts of the ground for 96 off 56 balls and his 109 run partnership with Dawid Malan made sure the result was never in doubt.

The Thunder are in a slump, a bad slump and need to turn it around as soon as possible with finals just a week away.

It is the form team in the Sydney Sixers we are siding with, especially with the value of $1.80 being on offer. Outside of the Renegades, the Thunder are clearly the most out of form team in BBL10 at the moment, despite sitting third on the ladder. With the likes of Philippe and Vince at the top of the order and an international quality bowling attack the Sixers look hard to go past as they look to cement top spot on the BBL ladder.

Josh Philippe has been the clear star for the Sydney Sixers, however just chipping away in the middle order has been their captain Daniel Hughes. He has 282 runs from 11 innings at an average of 31 and is as reliable as they come in the middle order. If the top order fails, we’re backing Hughes to make a handy contribution for the Sixers.

The England international is starting to prove his worth for the Sydney Sixers, having taken six wickets in his past three games including hauls of 3/25 and 2/33. He’s a world class death bowler, and we’re backing him in to pick up a couple of wickets towards the back end of the innings when the Thunder batsmen are looking to go big.