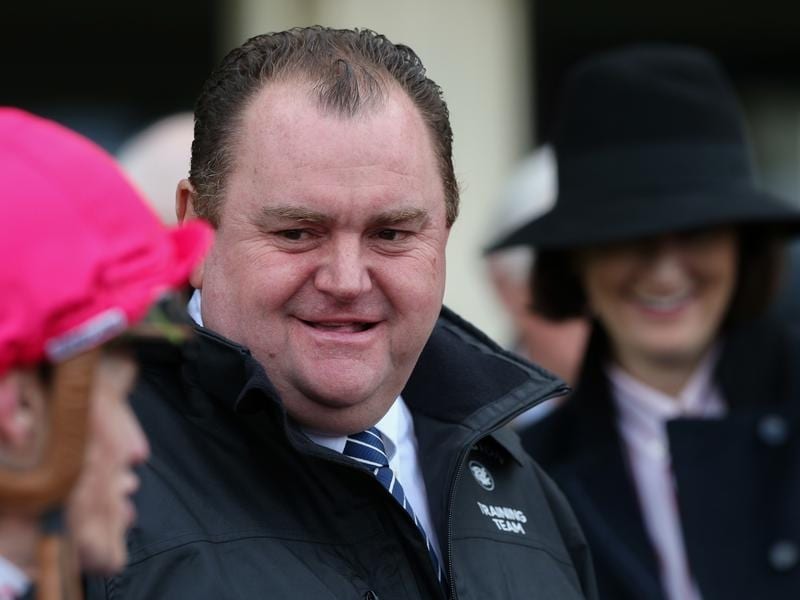 Unraced colt Stonefield is handling everything asked of him which has given co-trainer Troy Corstens confidence to pinpoint a lucrative interstate race for the two-year-old’s debut.

Melbourne-based Corstens is planning to run Stonefield in Saturday’s $500,000 Inglis Nursery (1000m) for two-year-olds at Randwick but will also accept for the colt in a race at Flemington on the same day as a back-up.

Stonefield is scheduled to travel to Sydney on Thursday night with Hugh Bowman booked to ride.

Corstens says the sales-restricted race has not been a long-range aim for Stonefield but has emerged as an ideal option.

“With two-year-olds I try not to expect or plan too much for any of them,” Corstens said.

“You put them on a little bit of a path but things change so much from day to day with them.

“About three weeks ago I started looking for a race for him and this popped up and looked perfect.”

As part of Stonefield’s preparation he was taken to Albury to barrier trial in the clockwise direction last Saturday.

He won the 900m-trial and pleased Corstens with how he handled the occasion.

“He had to officially trial to run in Sydney,” Corstens said.

“The trials were at Albury and I figured it was a really good way to see how he travelled and also how he went that way around.

Corstens, who trains in partnership with his father Leon, said Stonefield looked like he was going to be a nice three-year-old type but had come to hand quickly.

“I’ve been searching for a reason to tip him out and he just doesn’t give us one,” he said.

“He’s handling everything we throw at him. He had a jump-out at Flemington two weeks ago then had the trip to Albury.

“He has come home and hasn’t left an oat. As long as he travels up to Sydney well, I’m confident he’ll run a really good race.”