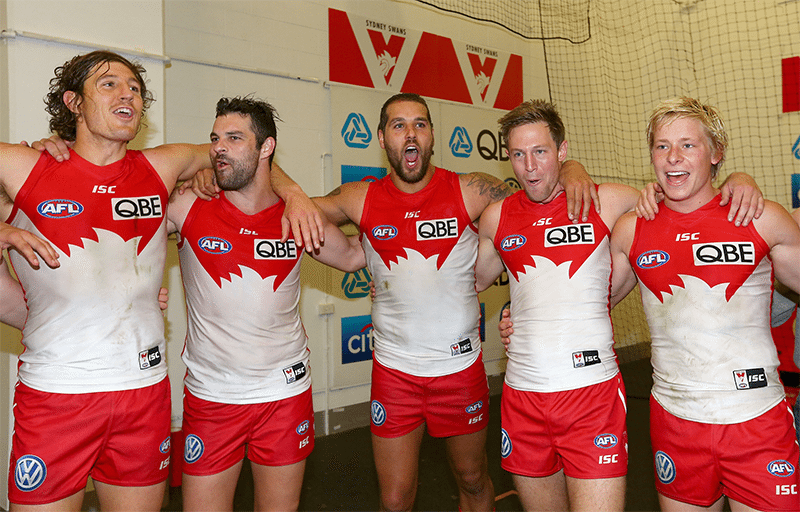 THE Sydney Swans will go into the first week of the AFL finals as the $3 premiership favourites at Sportsbet.com.au after securing the minor premiership.

The Swans locked away top spot on the ladder after decimating Richmond by a triple figure margin, and will meet cross-town rivals Greater Western Sydney, who are playing the first finals series in the club’s short history.

Despite winning the right to host the qualifying final, the Swans will play the Giants at ANZ Stadium, a neutral venue.

GWS star Devon Smith said the venue may give the Giants the advantage heading into their first ever final.

“It’s only across the road from Spotless (GWS home ground) so it’s not too far for us… hopefully they pack it out,” Smith said.

“We haven’t played there for a while and a few of our boys would never have played there.

“I don’t think Sydney have played a game there this year.

In the southern end of the country, a pair of old foes in the form of Geelong and Hawthorn will renew hostilities.

The Cats finished the season in emphatic fashion, smashing the demons by 111 points to claim the second spot on the ladder, while the Hawks only just managed to get past the Pies at the MCG.

Geelong’s big win ensured they will not travel in the first week of the finals, but Cats coach Chris Scott said they were confident, irrespective of an interstate trip or not.

“With the footy we’re playing we’d be confident that we could travel and get the job done as well,” he said.

“I hope that doesn’t sound arrogant or like we’re getting ahead of ourselves.

“We didn’t put a hell of a lot of time into thinking about where we were going to finish. It was more about playing our best footy.”

Week one of the AFL Finals

THE news on Monday that Brisbane coach Justin Leppitsch has been sacked has prompted Sportsbet.com.au to open a market on who will take over the Lions top job next season.

Former Carlton and current Hawthorn assistant coach Brett Ratten is the favourite to assume the position at the $5 mark, while John Barker ($7.50) and Stuart Dew ($8) are the next best in the market.

The Lions may look to a senior coach who has been there before, but Sportsbet sees that scenario outside of Ratten as an unlikely one given Mark Thompson ($16) Matthew Knights ($17) and Guy McKenna ($21) are all at bloated odds.

Former Brisbane Lion stars Jonathan Brown and Jason Akermanis are both at the $41 dollar quote.

Four-time premiership player Jordan Lewis gave Ratten a glowing reference, saying he former Carlton captain would be an ideal candidate for the Lions.

“It’s always hard as a player to comment, because we don’t directly ask him questions on whether he wants to coach again.

“He’s certainly capable and he’s shown that. He’s obviously coached Carlton. He just needs to make that decision in terms of what’s best for his family.

“There’s no coaching position available at the moment, but he will be weighing up his options. He’s certainly very capable of doing it.”

Former Carlton captain Chris Judd also said Ratten would be an astute appointment, but questioned whether he can work alongside the man that fired him at the Blues, current Brisbane chairman Greg Swann.

“I got on really well with Brett and he did a good job at Carlton, but it will be interesting to see if him and Greg Swann can work together again,” Judd said.

Next Brisbane coach for 2017