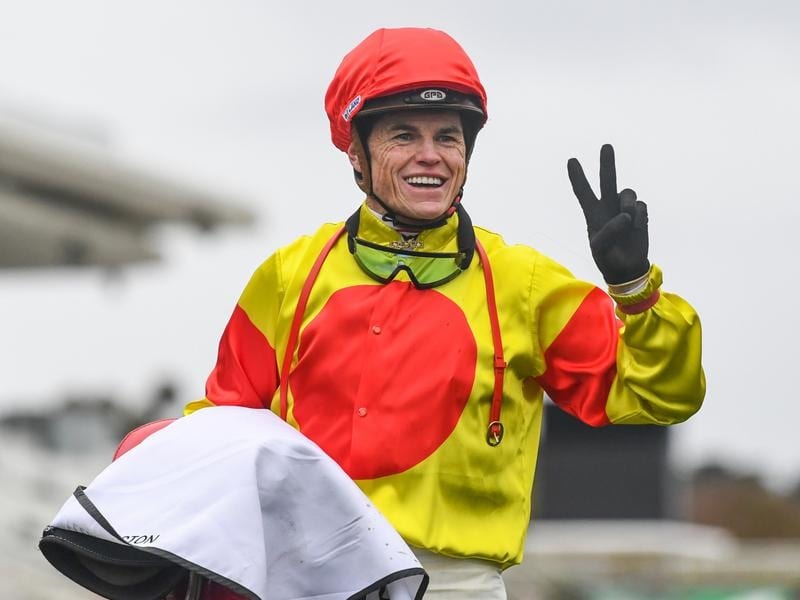 Craig Williams will test Surprise Baby as a Melbourne Cup mount in the Feehan Stakes at The Valley.

Trainer Paul Preusker believes his star stayer Surprise Baby can secure a start in the Cox Plate by winning the only race which carries a golden ticket into it, the Group Two Feehan Stakes at The Valley.

Preusker said even if Surprise Baby didn’t win he wanted to see enough to justify running him in a Cox Plate as a lead-in to the Melbourne Cup, for which he is favourite.

Surprise Baby hasn’t started since he finished fifth in last year’s Melbourne Cup when he flew home and was beaten just under a length.

Last year, Surprise Baby finished an unlucky fourth over 1600 metres in the Feehan Stakes and the trainer believes he is a better horse this time around.

“This is what we’ve been waiting for for him. It’s going to be exciting to see him back.

“If he doesn’t run up to how I think he will he’ll follow the same path as last year to the Melbourne Cup. The result will dictate what path he takes.”

If Surprise Baby doesn’t run up to Preusker’s expectations on Saturday, he will have his final run before the Melbourne Cup in a race he won last year, The Bart Cummings at Flemington on October 3.

Preusker only has to look at last year’s Feehan Stakes result to know a stayer can win the race first-up.

Homesman hadn’t started since he finished second in the Caulfield Cup 12 months earlier when he claimed it fresh last spring.

Saturday will also be the first time Craig Williams rides Surprise Baby in a race.

The horses’ owners decided to offer Williams first right of refusal to partner him in the Melbourne Cup and he has replaced regular jockey Jordan Childs.

Williams also has first option for the Cup ride on the horse he won aboard last year, Vow And Declare.

The top jockey made the trip to Horsham to familiarise himself with Surprise Baby in a gallop on Tuesday.

Preusker was thrilled with the horse’s work in which he sat off stablemates Lunar Fox and Admire Robson and sprinted past them in the straight to win by four lengths easing up.

Preusker said Surprise Baby had some quirks and he thought it would make a difference that Williams had been on board him before a race.

The trainer will be chasing his second win in the Feehan Stakes having claimed it two years ago with Magic Consul.