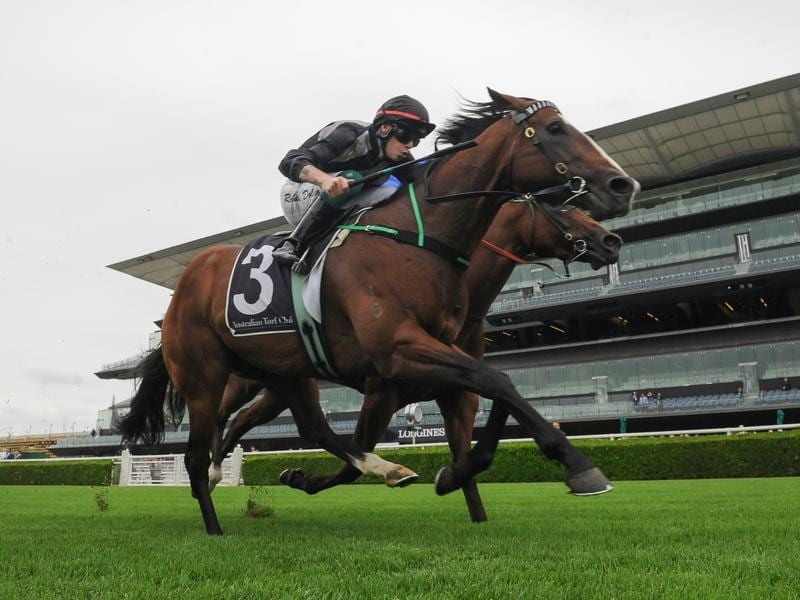 Splintex will face his acid test when he is pitted against Everest fancy Nature Strip at Randwick.

With nine slots in The Everest still up for grabs, trainer Mark Newnham will use the Concorde Stakes at Randwick as an opportunity to showcase the credentials of Splintex.

Competition for the remaining spots in the $15 million sprint is fierce but Newnham believes Splintex is a worthy contender.

The four-year-old faces the daunting task of taking on Everest favourite Nature Strip in Saturday’s Group Three 1000-metre dash but the presence of the star speedster will also provide an ideal measuring stick.

“Every sprint race at the moment is an audition for the Everest and Saturday will be Splintex’s audition,” Newnham said.

“Saturday, with the small field, we will find out where we sit as far as that goes.

Splintex has the right profile having won the Arrowfield Sprint in the autumn, the same race Classique Legend claimed 12 months earlier before finishing a luckless sixth to Yes Yes Yes in the 2019 Everest.

The Les Bridge-trained grey is one of three horses guaranteed a start in this year’s renewal at Randwick on October 17.

Newnham confirmed he’d had informal discussions with Everest slot holders about Splintex and had been advised the horse was on a watch list.

Robbie Dolan, Sydney’s champion apprentice for the past two seasons and now a fully-fledged jockey, has retained the Concorde ride.

A final field of six has accepted for the race, including South Australian Gytrash who is locked into an Everest path.

Newnham has also welcomed the easing of interstate travel restrictions by Racing NSW to allow horses from Melbourne into the state, provided strict biosecurity protocols are met.

He had considered kicking off Splintex’s campaign in Victoria but shelved those plans because of uncertainty over whether he could get him home.

While the relaxation of horse movement came too late for Newnham to change Splintex’s short-term program, he says it opens doors deeper into the spring.

“It gives me greater flexibility later in his prep so that, if need be, we can go down for either the Moir, or the Moir and the Manikato,” Newnham said.