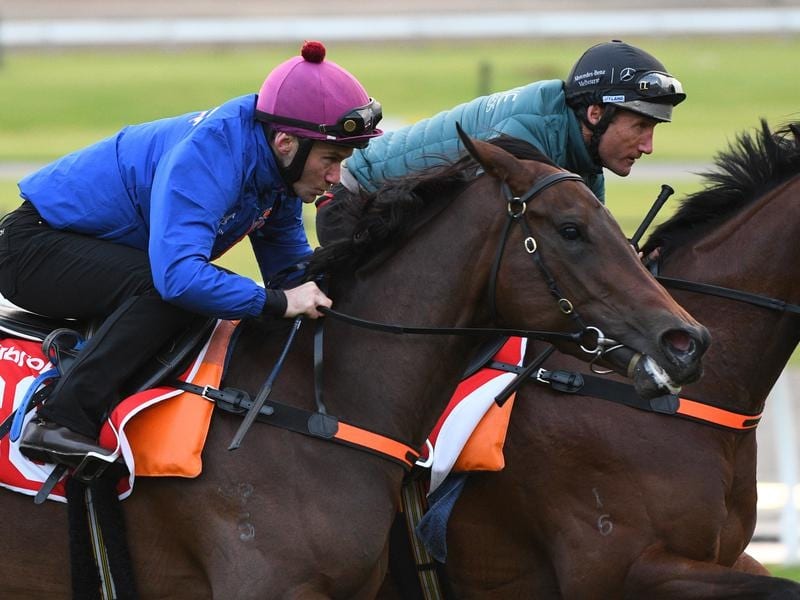 Sunlight (L) has had a gallop at The Valley ahead of the Moir Stakes after missing a race in Sydney.

Having missed a start in The Shorts in Sydney, Everest-bound Sunlight has been re-acquainted with The Valley ahead of the $1 million Moir Stakes.

Co-trainers Tony and Calvin McEvoy opted to scratch Sunlight from Saturday’s Group Two Shorts (1100m) at Randwick because of a wet track and sent her back to Melbourne to instead run in Friday night’s Group One Moir (1000m) to keep her campaign for the $14 million Everest on October 19 on track.

Her regular jockey Luke Currie was aboard the four-year-old in a hit-out at The Valley on Monday morning when the sprinter worked with younger stablemate Aten.

“She just came here to get re-familiarised with the Valley and do a sharp piece of work with a friend,” Calvin McEvoy said.

“We were really happy and Luke was happy. She pulled up clean and well and I think she enjoyed being back here at The Valley.

“Obviously there’s been a change of plans but it hasn’t been anything dramatic.

“She will run on Friday night and then we will re-assess whether she needs to back up in the Premiere Stakes at Randwick on Saturday week to get another run into her, or just trial her into The Everest.

“There’s plenty of options and we’re very comfortable where we’re at at the moment.”

Currie believes Sunlight has tightened up since running fifth of six in the Concorde Stakes (1000m) in her season return on September 7.

“She is going well. She is not completely wound up yet but she should keep improving from now through until The Everest.”

The Shorts field was reduced to five with several scratchings and won by Pierata on a soft surface.