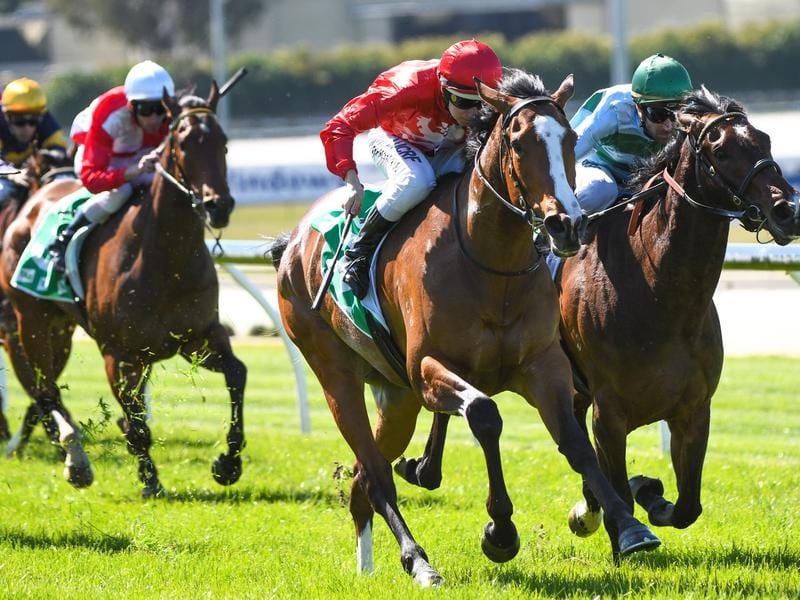 Stay Gold (pictured) has won at Cranbourne ahead of her older sibling Iconoclasm’s Group One bid.

Lightly raced Stay Gold has broken her maiden at Cranbourne, a few days before her big brother chases a Group One win at Caulfield.

Three-year-old filly Stay Gold is a sister to five-year-old Iconoclasm, also trained by Danny O’Brien, and he is among the contenders in Saturday’s Sir Rupert Clarke Stakes.

By Toorak Toff out of Gold Lottey, Stay Gold was having her third start in Wednesday’s TAB Multiplier Maiden Plate (1400m) at the meeting which carried city status, and with Damian Lane aboard she raced to a long neck victory as the $2.45 favourite.

“She is a full sister to Iconoclasm, so if she can fill out her frame and look anything like he does, there’s a lot to come with her,” Gleeson told broadcaster Racing.com.

“It’s great to get her maiden out of the way.”

Lane was positive on Stay Gold from the inside barrier to lead before angling out into what he believed was better going in the straight.

“It is a good sign when you can ride them a little bit out of their comfort zone and they can still win,” Lane said.

“I think it’s certainly not going to be the A1 way to ride her, so it is good that she shows that bit of versatility.

“I did have confidence that she was better than this grade so it enables you to do that and on the day she was too good.”

Iconoclasm was third to Rupert Clarke Stakes rival Age Of Chivalry in a 1400m open handicap at Caulfield at his most recent start on August 31 and will be having his fifth attempt to win a Group One on Saturday.

The entire has barrier 11 in the field of 15 and was at $14 in early betting on Wednesday.