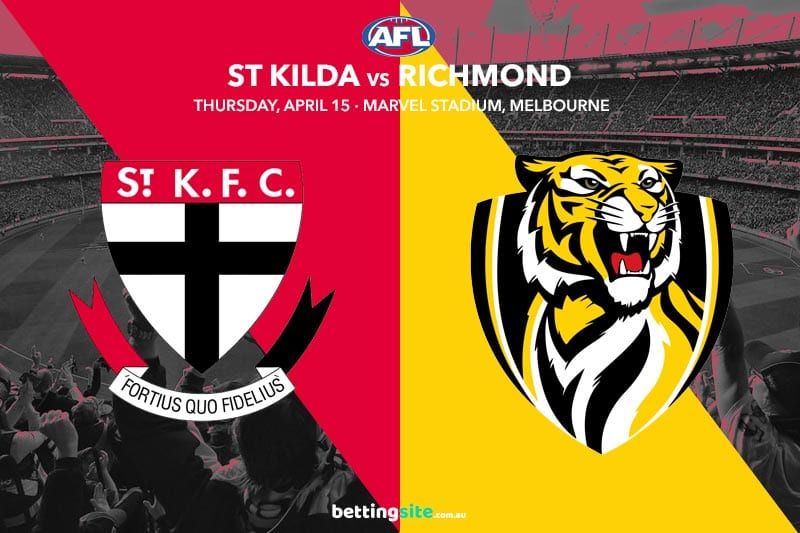 Richmond will look to stop the rot this Thursday night at Marvel Stadium when the defending premiers take on St Kilda in round five of the 2021 AFL Premiership season.

This will be the first time St Kilda and Richmond meet since last year’s semi finals, where the Tigers ran away with a 31-point victory against the inaccurate Saints.

Damian Hardwick’s men have lost two matches on the trot, with a number of key players underperforming in their defeats against the Sydney Swans and Port Adelaide.

The pressure was mounting on Brett Ratten and the Saints after their disappointing losses to Melbourne and Essendon, but they clinched their second win of the season last Sunday with an incredible second-half comeback against the Eagles.

The winner of this match will advance to 3-2, while the loser will be on the opposite side of the ledger.

The key forwards could decide this contest. Max King is coming off a career-high five goals against West Coast, which was his first tally of more than three majors in a game. Tom Lynch has averaged just under six scoring shots per game against the Saints since arriving at Punt Road, but he has only kicked seven goals. Games at Marvel Stadium tend to feature quick ball movement, which should bring the big forwards on both sides right into it.

Brad Crouch was amazing last week for the Saints, collecting 26 disposals and laying 12 tackles against the tough West Coast midfield. Jack Steele and Zak Jones are both in good form heading into this match, and now that Crouch is also flying, this will be a good week to include St Kilda’s star midfielders in your disposal betting picks.

The Tigers will have Kamdyn McIntosh available for selection this week after serving his mandatory 12-day concussion layoff, strengthening their wing, but Dion Prestia will be sidelined for a few more weeks with his hamstring. The run and carry was not at its best last week for the Tigers as they scored fewer than 80 points for the third game in a row, but the Saints have conceded the second-most total points in the league, so we could see a higher-scoring contest this Thursday.

Although Tom Lynch has not been at his best so far this season, he’s had enough looks at goal to kick seven majors and eight behinds. Lynch has matched up well against the Saints in recent years, and we expect that will be the case again this week. If he takes his chances, he could be in for a big night.

The only fault for the Saints in the second half of last week’s match was that they could have converted more chances. If Brett Ratten can get the squad playing similar footy this Thursday, they can beat the Tigers at Marvel Stadium for the second year running. Even if their struggles in front of goal continue, we think they will do enough to cover the spread.

The Saints should hold on to the line this week, as the Tigers are not at full strength. You cannot ignore the in-form Jack Steele in the disposal betting, while Tom Lynch should have plenty of opportunities inside 50 for Richmond.