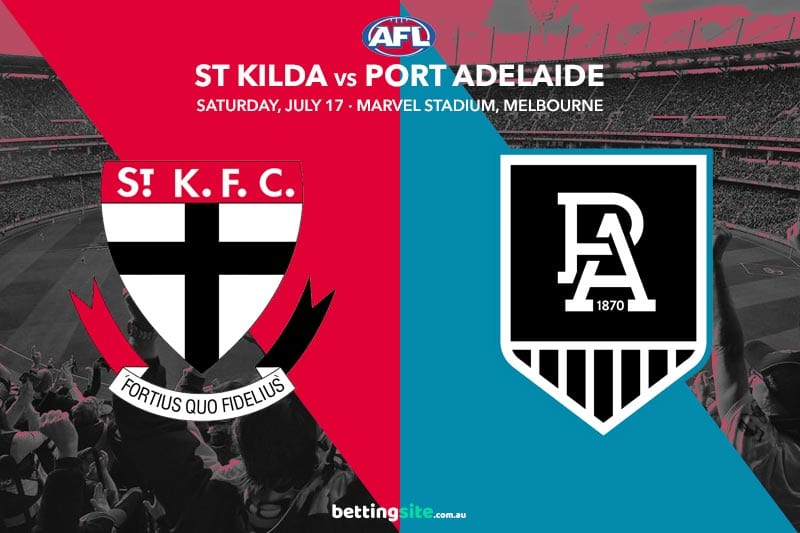 This week’s Saturday night feature in the AFL will see the in-form St Kilda Saints host the Port Adelaide Power at Marvel Stadium.

St Kilda and Port Adelaide very rarely meet in Victoria, as this will be just the fourth time since 2008 that the Saints host the Power in Melbourne. Despite the state entering a five-day lockdown, this fixture will go ahead as planned at Docklands.

The Power need to find a replacement for Zak Butters, who injured his knee upon returning against the Demons. Xavier Duursma may come back into the side after a successful run in the SANFL, but he could need more time in the reserves after missing three months with a knee injury.

The Saints will likely enter this clash with the same team that knocked off the Lions, as they got through last week’s tough contest unscathed.

The Saints have the longest active winning-streak in the AFL with consecutive victories against Richmond, Collingwood and Brisbane. Ken Hinkley’s men were beaten in front of their home fans last week, and their poor form against the better teams is a concern when faced with a fast-improving outfit like St Kilda.

Port Adelaide’s wingmen caused the Saints plenty of trouble earlier in the year, especially Karl Amon. The Power love to get the ball in Amon’s hands to utilise his elite kicking, making him an excellent choice to collect 25 or more disposals this week.

Two players who put their bodies on the line for their teams each week are Jack Steele and Ollie Wines. Both have quickly climbed up the Brownlow Medal betting market in the past month, particularly the St Kilda captain. Steele has been marvellous in the middle for the Saints across the last six weeks, and we like the $1.83 on offer for him to kick a goal this week.

The Saints will get off to a quick start against the Power and emerge as victors in a close battle. Ken Hinkley’s men win a majority of their matches against teams outside the top eight, but we think this week will be an exception. The Saints displayed excellent signs in their upset win over the Brisbane Lions, a team the Power lost to by 49 points earlier in the year.

Karl Amon to get 25+ disposals

Karl Amon was unstoppable when these sides faced off in round six, collecting a career-high 34 disposals for the Power. Amon has been on fire in the last month, averaging 25 touches per game and beating that mark in his last two outings. The online bookies are offering $2.40 odds for Amon to amass 25 or more disposals this Saturday, which we think is overs.

We think the Saints are going to knock off the Power in a tight battle at Marvel Stadium. Jack Steele is in career-best form and should hit the scoreboard, while Karl Amon will get off the chain against the Saints for the second time this year.