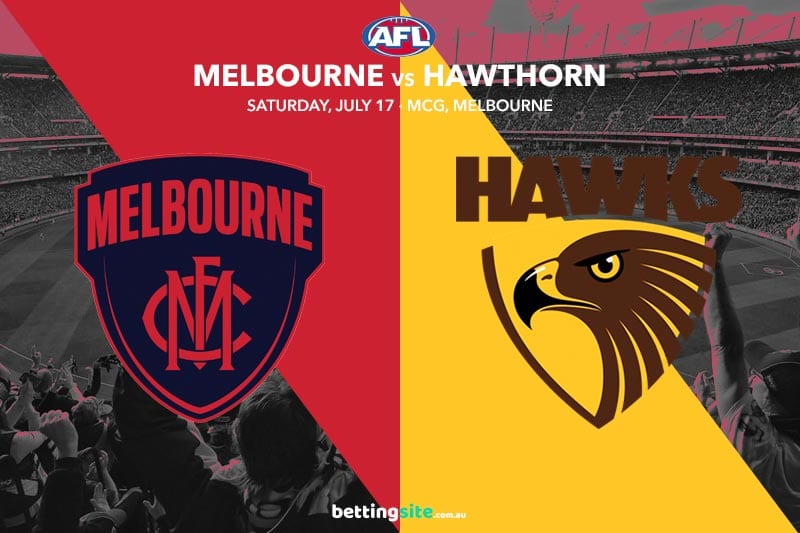 The Melbourne Demons will look to strengthen their position on top of the AFL ladder this Saturday when they host the struggling Hawthorn Hawks at the MCG.

Online bookmakers are predicting a very one-sided affair in favour of the Demons, who are fresh off a strong win over the Power in round 17. Hawthorn was torn apart by the Dockers last week in Tasmania, where a pair of important Hawks unfortunately suffered injuries.

Changkuoth Jiath has been a star for the Hawks this season, but his 2021 campaign came to an end after suffering a PCL injury. Jack Scrimshaw (concussion) was also ruled out for the clash with the Dees.

Alastair Clarkson will bring back Blake Hardwick to replace CJ, while a number of young Hawks could be considered to replace Scrimshaw. The Dees were injury-free against the Power, meaning they will likely go unchanged this weekend.

If you think the Hawks are a chance this weekend, think again. The Demons easily cast aside Port Adelaide last week and are starting to hit their best form. Without Jarman Impey, Will Day or CJ, the Hawks will have no creative ball-movers out of the back half, which will allow the Demons to lock the footy inside 50 and force repeat entries.

The Demons’ forwards should see plenty of the ball, and the likes of Kysaiah Pickett, Tom McDonald and Bayley Fritsch should all hit the scoreboard. Fritsch has already slotted 32 goals in 15 matches his year, and Sportsbet is offering $2.25 odds for him to kick three or more goals this Saturday.

Jack Viney and James Worpel share a lot of footy characteristics, as they are both tough players that love winning contested possessions. Viney has had an interrupted season thus far, but he is starting to put some good form together after three straight games. Worpel had a terrific 2019 season for the Hawks, but his numbers dropped last year and he has not gotten back to his best yet. The Hawks need Worpel to step up if they are to have any chance of halving the midfield battle this week.

These two teams clashed back in round five this season and the final result was a huge victory to the Dees. The Hawks had been trending upwards in the last three weeks, but their recent injuries have crippled them. We think the Demons are going to smash them again, which could result in an even bigger final margin than round five’s 50 points.

James Worpel to get 25+ disposals

Although James Worpel is not finding as much of the footy this season, we think the young midfielder will lift this weekend. Worpel only had 16 touches against the Demons in round five, but his form has slowly improved as the year has progressed. He is well and truly capable of 30 or more disposals in a game, and we like the value about him to have at least 25 this weekend.

Expect a big win to the Demons this Saturday at the MCG, where Bayley Fritsch should kick a handful of goals against the undermanned Hawthorn defence. James Worpel will shine in the midfield for the Hawks, who we do not think will cover the line. You can net yourself an $11 return at Sportsbet with these three legs.