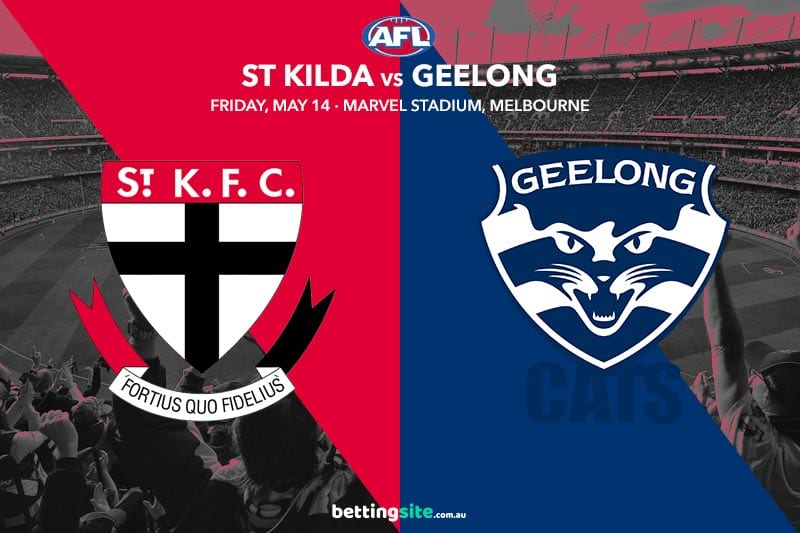 The St Kilda Saints and Geelong Cats will kickstart round nine of the 2021 AFL Premiership when they clash at Marvel Stadium on Friday night.

You could not fault the Cats in their impressive 63-point victory over Richmond last week, as they continued to pile on goals in the second half despite multiple injuries.

Chris Scott will need to replace Sam Simpson (hamstring), but both Luke Dahlhaus and Esava Ratugolea have been cleared to play despite finishing last week on the sidelines.

St Kilda will welcome back Seb Ross after the birth of his twins last week, while former Hawthorn premiership player James Frawley could make his club debut as the Saints look to counter Geelong’s tall forward mix.

When these sides met at the Gabba last season, the Cats ran away with a 59-point victory, but the Saints were missing Paddy Ryder, Seb Ross and Zak Jones, who are all currently in great form. With Patrick Dangerfield still sidelined for the Cats, this match could be a closer contest than the online bookmakers expect.

The inclusion of Ross will make a big difference this weekend, as the hard-running midfielder can be used both on the wing and in the middle. Ross has collected 31 and 29 disposals in his last two contests, while he also averages 26 disposals against the Cats. You can find Ross at $2.50 with Sportsbet to get 25 touches.

The key forwards will be the most important players under the Marvel Stadium roof this week, especially the in-form Jeremy Cameron. The former Giant has started his career at Kardinia Park in excellent form, kicking 12 goals from his first three matches.

Max King is currently enduring a form slump, having only kicked four majors from his last four outings. King has never put through a goal against the Cats, but that should change this week as the Saints look for their third win on the bounce.

Even though the Saints will field a strong side this Friday night, we have to side with the Cats. That said, we think St Kilda will do enough to keep the margin under 40 points. While they have suffered a few blowouts already this season, Brett Ratten’s men should this week go down in an honourable loss to a very good Geelong side.

Seb Ross to get 25+ disposals

St Kilda’s no.6 has collected over 25 disposals in three of his six career matches against the Cats, including two games with 33 touches. Ross has been outstanding for the Saints since Rowan Marshall returned from injury, playing far better with the first-choice ruckman in the squad.

Jeremy Cameron has kicked three or more goals in all of his matches this season, and we expect the two-time All Australian will maintain that stat when he faces the Saints this Friday night. The Cats will secure their sixth win of the 2021 season, with Seb Ross leading the way for the home side in the midfield.