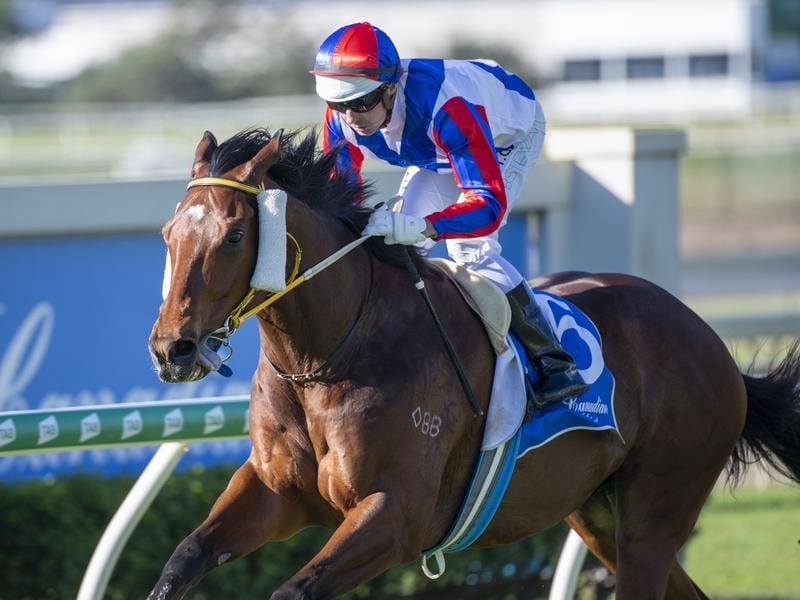 Soxagon will face his toughest test so far when he goes to Listed level in the Glasshouse Handicap.

Promising gelding Soxagon has had an old-style build-up to his first attempt at a stakes race.

Soxagon takes on a solid list of rivals in the Listed Glasshouse Handicap (1400m) at the Sunshine Coast after working his way through the classes.

The gelding was being mentioned as a possible Group One Stradbroke Handicap horse after running second in The Gateway at Eagle Farm in December.

The Gateway carried automatic entry to the Stradbroke and the winner Vega One eventually ran fourth in the big race.

In an era where promising horses are sold overseas or rushed into stakes races, trainer Mark Currie and owner-breeder Brian Burke have been content to bide their time with Soxagon.

Burke, who races Soxagon in partnership with Currie’s wife Donna, said Soxagon had shown he deserved a crack at stakes company.

“Mark has brought him through the classes and picked the races for him. It has been the successful old-style way with horses of not over matching them too early,” he said.

In-form jockey Michael Cahill takes over from Brad Stewart who is unable to ride at 54kgs.

Meanwhile, trainer Lindsay Gough believes comeback gelding Right Or Wrong is getting to his preferred distance in the Glasshouse.

Right Or Wrong has had four runs back from a spell over 1200m and 1350m after again suffering tendon problems in 2018.

“The 1400m on Saturday will suit him better but he is probably looking for 1600m,” Gough said.