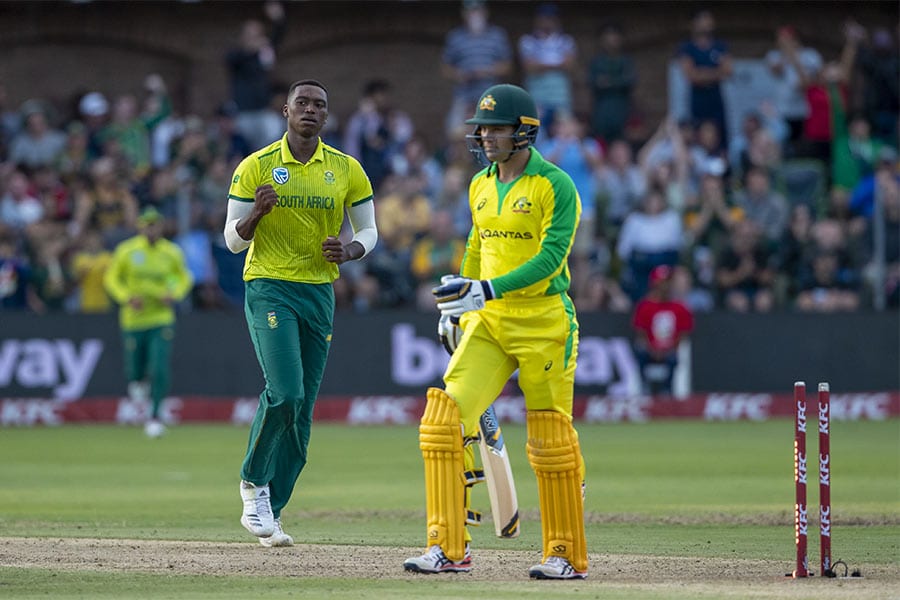 The Australian men’s T20 cricket team head to Cape Town on Thursday (AEDT) for the deciding match in what has been a topsy-turvy series.

The visitors bolted out of the gates in Johannesburg last week, rumbling South Africa for just 89 runs as Ashton Agar snared five wickets and a hat-trick.

The Aussies looked to be cruising to a series-clinching win in Port Elizabeth over the weekend, but an epic middle-order collapse left David Warner stranded as they came up 13 runs short of the 159 required.

While those results have led to some interesting variations in the match odds for the series closer at Newlands, all the leading cricket betting sites have Aaron Finch’s men pegged as favourites.

The Proteas swapped out Dale Steyn for Anrich Nortje in the second match, so it will be interesting to see whether they recall their veteran quick or stick with the unit that did the job on the Eastern Cape.

Temba Bavuma missed the first two games of the series with a hamstring injury, but he is a chance to return in place of either Reeza Hendricks or Pite van Biljon.

With the sole exception of Glenn Maxwell, who pulled out of the tour with an elbow problem, Australia have no fitness issues as they prepare for their first visit to Cape Town since the ball-tampering scandal of 2018.

South Africa’s new skipper led by example at Port Elizabeth with a critical 70 at the top of the innings. De Kock is the only Proteas player to pass 40 this series and looks a good bet to top score again.

Finch’s record in white-ball cricket shows a remarkable habit of going big every three or four knocks. The Aussie skipper made a solid 42 in the first game and missed out in the second, so he is just about due to explode.

Having missed the last Test against England due to suspension, Rabada looked sluggish on his return at the Wanderers. With a couple of games under his belt, the talented quick should be primed for Newlands.

Agar grabbed the headlines in Jo’burg, but let’s not forget Zampa’s 2/9 at 3.6 runs per over. South African batsmen have serious issues against spin bowling, so a leggy of this guy’s quality is always in the mix.

After their capitulation in Port Elizabeth, there is no little pressure on the Aussies to bounce back. They can expect a hostile reception at Cape Town, where Steve Smith and company disgraced the baggy green nearly two years ago. Even so, the visitors have the better team on paper and should do the job against a South Africa side in transition.