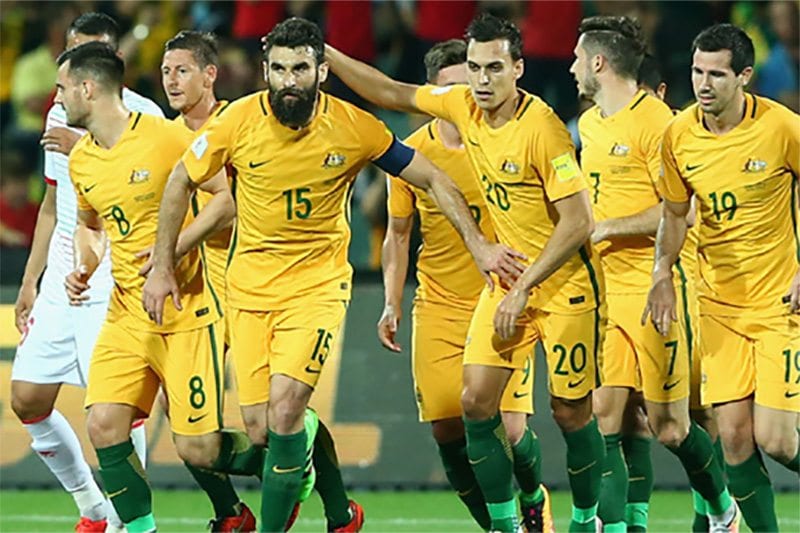 THE Socceroos continue their path to the 2018 World Cup in Russia with another qualifier against growing rival Saudi Arabia.

And it will be on home turf this time, after they escaped from the King Abdullah Sports City in Jeddah, Saudi Arabia, with a 2-2 draw.

Saudi Arabia’s superstar Nawaf Al Abed got the ball rolling, setting up team mate Taisir Al Jassim for the first goal of the game, putting the Socceroos on the back foot.

But they worked their way into the contest and Australia’s next great Aaron Mooy helped them regain parity when he landed a perfect free kick on the head of defender Trent Sainsbury, who made no mistake.

Celtic gun Tom Rogic was in every thing and his attacking flair paid huge dividends with 20 minutes to go when he found Robbie Kruse on the run, the winger hitting up Tomi Juric who duly found the back of the net to give the
Aussies a 2-1 advantage.

That should have been all she wrote, but substitute – and Saudi favourite – Nasser “The Earthquake” Al Shamrani had the final say when he directed Al Jassim’s pass into the Aussie goal.

Draws against Japan, Thailand and Iraq followed that, before the Socceroos finally broke through for a win over the United Arab Emirates at Allianz Stadium in March.

In that game, the Aussies did managed to slot two goals – off the boots of Matt Leckie and Irvine – but Ange Postecoglou copped plenty of criticism for his new 3-2-4-1 formation that left the back three of Brad Smith, Bailey Wright and Trent Sainsbury exposed on more than one occasion and the concern is that a more polished attacking opponent would have made more of the opportunities that were provided.

Any way those games are now part of history and the Saudis now lie in wait for their next clash.

Here is our look at how Australia can qualify for the World Cup, what they need to do from here and our tip for who wins the game.

Who to bet with

If you want to bet on the Socceroos’ World Cup qualifiers – or any football match, for that matter – you need an online bookmaker who is going to not only protect your money, but honour your bets and provide a wide variety of markets on your favourite sport. There are plenty out there who are happy to take your money, but not always so helpful when it comes to paying out. We have done that work for you and come up with this list of online bookmakers you know you can trust.

How the Socceroos qualify for the World Cup

Australia is part of the Asian Football Confederation, or AFC, qualification structure for the World Cup, which gives its teams four and a half slots in the big dance (four go straight in and one plays off against the fourth placed Confederation of North, Central American and Caribbean Association Football for the final spot).

The Socceroos are currently in the third round of qualifying, which features 12 teams – eight group winners and four runners up.

Those 12 teams are divided into two groups of six, with the top two from each group going straight through to the World Cup and the other team decided in a home and away playoff to decide which will take on the CONCACAF qualifier for the final spot in the World Cup.

Australia is part of group B and, while it is the only team in the group yet to lose a game, it sits only third, due to drawing four of its games.

Japan and Saudi Arabia are both ahead on 16 points, with the Aussies on 13. They would need to defeat Saudi Arabia by three goals to leapfrog them into second.

With their gritty draw in Saudi Arabia, the Aussies showed their fighting qualities away from home soil. In front of an expected sell out home crowd at the Adelaide Oval cauldron, the nation won’t be expecting anything less than a victory. And we reckon the Socceroos will deliver on the home stage. The man the Socceroos must stop is Saudi Arabian scoring machine Nawaf Al Abed. The Saudi star has four goals across the AFC qualification, good enough for equal second on the strikers’ table. The Socceroos have conceded a goal in four of their seven games – and two against the Saudis – who have scored the second most goals in the competition, behind Japan. We think they definitely have one goal in them, but, at the end of the day, the Aussies should be too strong and have too much to play for in front of their home fans. We think they just have the edge, 2-1 in a nail biter.

Mile Jedinak
We simply can’t go past the Australian captain to be the first man to find the net in this match against Saudi Arabia. Only four players have more goals in the AFC qualification games than Jedinak, who has slotted a trio of goals for the Aussies. He is the midfield prime mover, the penalty taker and he just has that edge in class and attacking flair that every other Aussie not named Tim Cahill lacks.