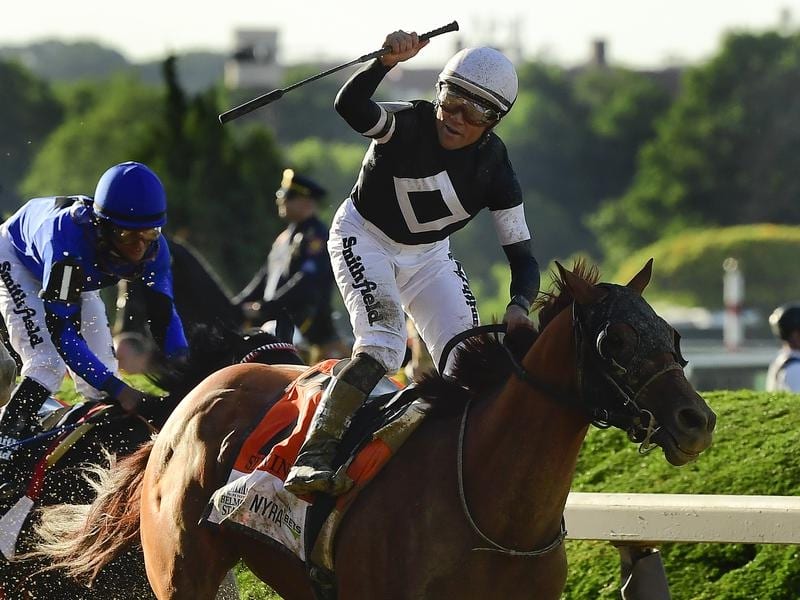 Joel Rosario has riden Sir Winston to an upset win in the Belmont Stakes in New York.

Sir Winston has given the Triple Crown series another unexpected turn, rallying to capture the Belmont Stakes in New York.

The win gave trainer Mark Casse the final two jewels in the showcase for three-year-old thoroughbreds. He won the Preakness with War Of Will who was expected to battle favourite Tacitus in the 1-1/2 mile (2400m) Belmont on Saturday (Sunday AEST).

Instead, Casse’s other colt, a 10-1 chance, took the lead after a ground-saving ride by Joel Rosario and held off Tacitus by a length. Long shot Joevia finished third and Tax was fourth.

The Triple Crown grind caught up to War of Will, who ran in all three races. He finished ninth in the 10-horse field.

The Belmont capped an entertaining Triple Crown highlighted by a disqualification in the Kentucky Derby and a horse without a rider in the Preakness.

It sparked interest in thoroughbred racing despite no possibility of the third Triple Crown winner in five years, coming on the heels of Justify last year and American Pharoah in 2015.

In the straight, Rosario angled Sir Winston off the rail and slightly bothered stablemate War of Will.

This time, there was no inquiry or objection. Sir Winston surged to the lead and held off a late run from Tacitus, who had an extremely wide trip under jockey Jose Ortiz.

This unpredictable Triple Crown season started with a wild result in the Kentucky Derby. Maximum Security crossed the finish line first and become the first apparent winner to be disqualified, demoted for interfering with War of Will and Country House was elevated to first.

War Of Will came back two weeks later to win the Preakness, but his impressive performance was overshadowed when a rival threw his jockey and ran around the track as the race continued.