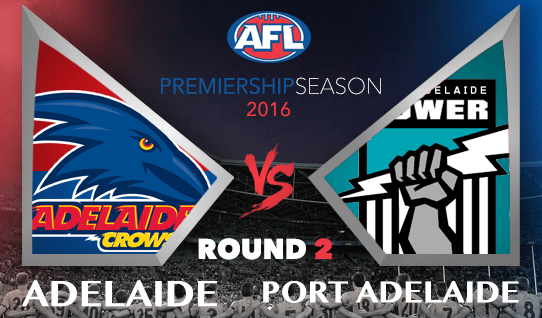 THE old saying goes ‘if you can’t stand the heat, get out of the kitchen’ and the pressure in the Showdown between bitter rivals Adelaide and Port Adelaide is set to be an inferno.

Only the strong survive and it will be the men who stand above who contend for the Showdown Medal for best player on the pitch on Saturday.

Both sides possess a potential bevy of stars, but Port Adelaide has the top four players in the medal market with sportsbet.com.au, reflective of its favouritism in the betting.

Superstar utility Robbie Gray is the hot favourite for the medal at $7 and he is the only player in single figures.

Guns small forward Chad Winged is next at $10, while Power captain Travis Boak and tough as nails on baller Ollie Wines are $11 to be named best on ground.

Adelaide’s midfield dynamos Rory Sloane ($11 with sportsbet.com.au) and Scott Thompson ($14) lead the way for the Crows in the betting, while Big Sauce Sam Jacobs is $16.

It is little wonder Gray is leading the way in the betting.

He bagged three of the first four goals in the second quarter of the Power’s round one win over St Kilda on his way to a bag of four, while collecting 26 disposals to go with four marks.

He is arguably the Power’s best player and, when he fires, they are usually unstoppable.

His mate Wingard is just as vital to the club’s set up and his three goals and 21 disposals on the weekend continued the one-two punch between he and Gray.

The pair shares a special bond on the field and could be the most destructive small forward combination in the AFL.

There has been some controversy this week over the Showdown, with arguments between the two clubs over whether the medal should be renamed in honour of slain former Crows coach Phil Walsh.

Last year’s Showdown Medal, won by the Crows’ Thompson, was renamed the Phil Walsh Medal for the match, which was played just weeks after his death.

The Crows wanted to name the medal in his honour permanently, but the Power baulked at the request.

Our betting tips for the showdown

Don’t sleep on Jacobs. He had won the medal twice in the past and is arguably the best ruckman in the game (if you pretend Todd Goldstein doesn’t exist). Considering Port’s Matthew Lobbe was absolutely mauled by up and coming Saints ruckman Tom Hickey on the weekend, Jacobs is set for a monster and it would not surprise to see him overshadow every one else on the big stage. Sloane, Thompson, Big Sauce, Tex Walker. They are all guns, but the player who tends to be the Crows’ barometer, more than any other is the little goal machine up front, Eddie Betts. The former Carlton goal sneak has turned himself into arguably the best small forward in the game since he crossed to Adelaide and his ability to do the mercurial, coupled with a natural flair, will always make the voters sit up and take notice. It’s Betts’ fifth Showdown and he has a pristine record in the fixture, booting 14 goals in the previous four, including 5.3 in Showdown 38. Watch him go to town here and he is very juicy odds at $21.

Things are looking a little Gray for Port Adelaide on the weekend, but that’s a good thing if you’re a Power supporter. It’s hard to go past the established star Robbie in the Showdown Medal market. He is just so damn good. Like a Rolls Royce in the middle, Robbie is one of the rare few players who can dominate in the midfield and then flock forward and boot big bags of goals. If he fires, Port Adelaide will win and he will be right under the voters’ noses. Another Gray who doesn’t quite attract the attention of his unrelated namesake is Sam. But it might only be a matter of time before he’s mentioned in the same sentence after a supreme performance against the Saints on the weekend. Sam was an absolute prime mover for the Power, garnering an astonishing 37 disposals, that featured 18 kicks and 19 handballs, to go with five marks and three tackles. Barring something remarkable, those numbers would just about guarantee the medal lands around his neck, should he reproduce that form against the Crows.

Both sides impressed for different reasons in round one.

The Crows, while they fell to North Melbourne, 16.11 (107) to 14.13 (97), were far from disgraced in their first outing without departed superstar Patrick Dangerfield. Away from home, they led deep into the last quarter, before the Roos managed to pull away, despite 30 disposals from Thompson and five goals from towering full forward Josh Jenkins.

As we mentioned, the two Grays were the dominant men on the park, but they had help from Jasper Pittard, who managed 27 touches and Matthew Broadbent (26). Big recruit Charlie Dixon booted three goals and he looms as a man (among many) the Crows must stop in order to win this one.

Last year’s Showdown was the closest fought derby in history, with the Crows prevailing by just three points and we reckon there is another thriller on the way.

But we’re tipping the Power to get over the line by a kick.

They have too many weapons and should be keen for revenge after the disappointment of last season’s loss in the tribute to Walsh.