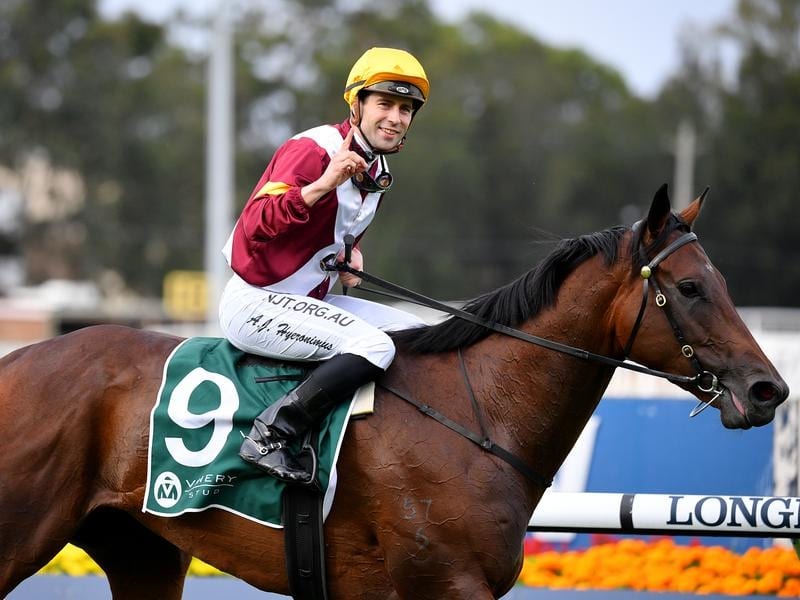 Shout The Bar is primed to add the Australian Oaks to her G1 Vinery Stud Stakes win.

Shout The Bar has already shot to prominence with her Group One win in the Vinery Stud Stakes, but the filly’s first racing preparation is not done yet.

The three-year-old will be out to add Saturday’s Group One ATC Australian Oaks (2400m) at Randwick at her fifth start and her co-trainer Adrian Bott says the filly continues to thrive.

After two wins in lesser grade, Shout The Bar finished a close second in the Kembla Grange Classic last month before stepping up to win the Vinery Stud Stakes (2000m) at Rosehill, beating star fillies Probabeel (2nd) and Funstar (4th).

Bott said the Oaks had always been a target for Shout The Bar, who was third favourite on Friday at $4.60.

“I know she’s by Not A Single Doubt and it may not necessarily scream out Oaks candidate on her breeding, but from what she was showing us early on we always thought the Oaks might be a target for her,” Bott said.

“She’s not here as an afterthought by any means.”

Bott expects Shout The Bar’s toughness to take her a long way again with Adam Hyeronimus, who claimed a first Group One win in the Vinery, again aboard.

“I was not shocked at the result last start but obviously she was a lightly raced filly taking on two proven Group One horses and I thought it was going to be a bit of an ask for her,” Bott said.

“But she showed the improvement to be racing at that standard and she was very brave.

“She was there to be beaten but she never laid down and fought them all off.

“That will take her a long way in the Oaks. She’s fit and well and if she can see out the trip she’ll be fighting it out for a long way.”

Bott expected a lot more from Dorothy Of Oz in last Saturday’s Adrian Knox Stakes, with the filly weakening to finish 10th after leading.

He thought she might have raced too keenly over 2000m in blinkers and would also be improved fitness-wise.

“She’s got the bloodlines to stay,” he said.

The filly is by Redoute’s Choice out of 2007 NZ Oaks winner Princess Coup.

“I think with taking the blinkers off and maybe with a more conservative run, if she can settle in the race we’ll see a turnaround in her performance and more in line with what we were hoping to see from her last Saturday,” Bott said.