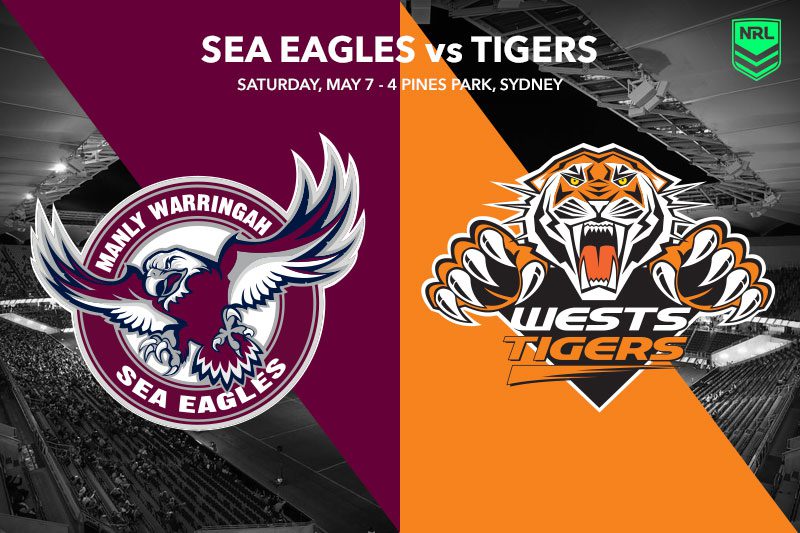 The early timeslot on Super Saturday in round nine of the 2022 NRL season sees the Wests Tigers face a huge test against the Manly Warringah Sea Eagles.

The Tigers have improved dramatically over their last three starts, and with a bit more luck they could have stolen a win off the Dragons at the death in Round 8.

The Sea Eagles come into this game off a heavy loss to South Sydney, but gave a good account of themselves after being forced to play for 70 minutes with 12 men on the field.

The Tigers come in as a $4.90 outsider and would have been a good value underdog pick a week ago, but the return of Tom Trbojevic makes them hard to back with any confidence.

David Nofoaluma and Luciano Leilua will be missing for the game and they are two of the better strike weapons for the Tigers.

Having to rely on Luke Garner to play consistently at centre and Starford To’a at fullback is less than an ideal situation, but their middle forwards will be boosted by the return of Stefano Utoikamanu on the interchange bench.

A quirky statistic but one worth noting for punters is the last seven teams who have lost to the Dragons have gone on to lose the following week.

To counter that fact, the Sea Eagles have failed to cover the line in eight of their last 11 games at 4 Pines Park, so punters could be convinced to take the +13.5 head start the online bookmakers are giving Wests.

The troublesome right edge for Manly in defence opens the way for Oliver Gildart and Ken Maumalo as the best options to score tries for the Tigers, and the majority will take the tasty $2.40 on Maumalo.

Despite going down 40-22 to the Rabbitohs, there were times in the game where the Sea Eagles with 12 men troubled South Sydney and even lead the game.

While they were never going to win once Karl Lawton was sent off, it would have impressed their fans to see them show so much heart to make it a contest.

The previous week they were on the end of one of the all-time great performances from Siosifa Talakai who destroyed their right edge, so diagnosing their form line is tricky.

Are there real issues for Des Hasler to fix, or have they simply been on the wrong end of two anomalies in their last two games?

The good news for them this week is the return of Tom Trbojevic from knee surgery and Josh Schuster will play his second game for the year.

The two had a brilliant combination in 2021 and it’s easy to see Schuster engineering something for ‘Turbo’ down the left side that ends in a four-pointer for Manly.

This feels like a good chance for them to bounce back with a win while the Tigers are missing two of their better players, but not at the 13 plus margin many would normally be predicting.

There is only one positional battle anyone cares about for this game and that’s Daly Cherry-Evans and Jackson Hastings. As teammates in 2018 it was no secret the two despised each other, and it will be fascinating to see how Hastings approaches the game. He has returned from England a more mature player, and Tigers fans will hope he doesn’t produce erratic moments that plagued him during his first tenure in the NRL.

Manly at the 1-12 point margin makes the most sense for this game. Even with Tommy Turbo’s inclusion, their backline doesn’t have the strike it normally does due to injury. Tommy will score on return – not just one, but two tries.

We are taking Manly 1-12 with a Tommy Turbo double and Ken Maumalo scoring a try. That treble is paying a cool $25.99 at Ladbrokes.