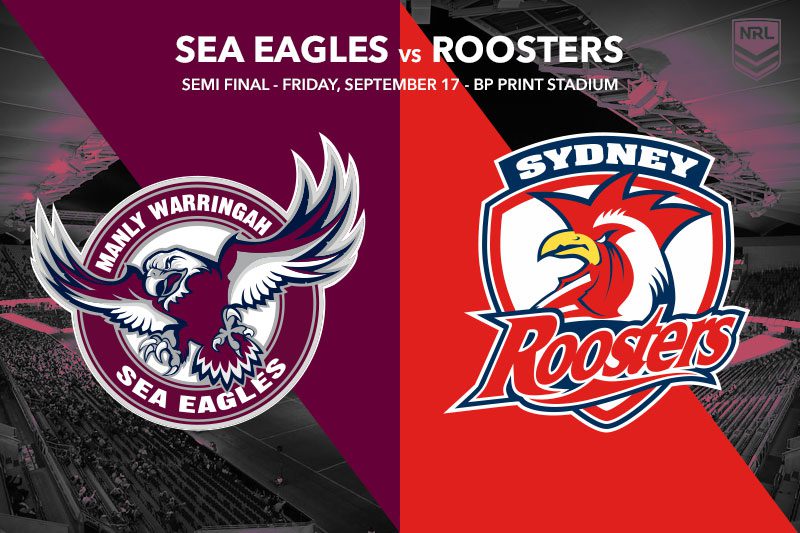 Week 2 of the 2021 NRL Finals Series moves to Mackay, where the Manly Warringah Sea Eagles and the Sydney Roosters will kick things off on Friday night.

The Sea Eagles were the disappointment of Week 1 with a subpar performance against the Storm, so they will need to improve a whole lot if they want to book a date with South Sydney in the preliminary finals. Tom Trbojevic had one of his quietest games of the year due to Manly’s forwards being dominated, and fans will be hoping for a big bounce-back game from their star fullback. Despite the heavy loss, the Sea Eagles still come in as a short $1.31 favourite in the head-to-head market.

The Sydney Roosters were dealt a judiciary blow when Sam Verrills was handed a two-match ban for a high tackle, so they can add yet another player to their incredible list of unavailable players. It will most likely see Ben Marschke called up from the reserves to provide cover, or does Trent Robinson perhaps move Lachlan Lam to hooker to start Sam Walker at halfback despite concerns around his shoulder injury?

Expect an enormous bounce back from the Manly Sea Eagles after they were thoroughly embarrassed by the Storm last week. It left commentators in the media asking if they were the real flat-track bullies of the competition as they started to look at who they racked up big wins against in the regular season. From Round 11 through to Round 25, only three of their 11 wins were against top-eight opposition, so perhaps $1.31 favouritism isn’t justified? The -10.5 line is even harder to get your head around once you look at that soft run into the finals.

The trio of Tommy Turbo, Jason Saab and Reuben Garrick are all $8 or shorter to be the first tryscorer for the match, but what about Daly Cherry-Evans as the local hero at $23? DCE grew up in Mackay and could do something similar to what Matt Burton did earlier this year when he returned to Dubbo. Putting Manly’s back three into a same-game multi to cross at any time gives a nice price of $3.60 at Sportsbet, but if you do want to go big, why not add a 1-12 winning margin to that combo to boost it to $16.75?

Sydney survived an almighty scare from the Titans in Week 1 and are now missing their first-string hooker for the game. They’ve run head-on into every challenge that’s been thrown at them, so this will feel more like a slight inconvenience than a fatal blow to their chances.

The +10.5 line is absolutely jumping off the screen, and Chooks fans should be getting all over that at $1.90. The story of Sydney’s season tells you they aren’t going to get blown out; they are battle-hardened and, to be quite honest, their opposition isn’t. Their forward pack is still terrific on paper and can get on top of the Sea Eagles.

Matt Ikuvalu at $13 looks to be the best option to score the first try for the Roosters, but the $31 for Angus Crichton as an outsider deserves big-time consideration. In the anytime market, Daniel Tupou at $2.70 is almost stealing, so be sure to include him in any same-game multis.

The two best fullbacks in the world today will be on show at Mackay this Friday night. The locals will never have a better chance to watch two superstars duke it out on the big stage, and there should be a riot to get tickets to see this in-person. Tom Trbojevic and James Tedesco have had ridiculous seasons and they couldn’t be more different. Tommy Turbo’s numbers are almost unbelievable and his highlight reel is so good it looks like it’s been doctored. Tedesco, meanwhile, has carried his club all season and proven to be an outstanding leader. His body is always on the line for his teammates and his appetite for any task has been tremendous. Fans should sit back and be thankful both players are in the NRL at the peak of their powers.

Sorry, Manly fans, but it looks like it will be a straight-sets exit. The Roosters just know how to win this kind of game and the story of their season has been one of ‘whoever is healthy can do the job’. The +10.5 line is almost impossible to ignore, but why not take the $5 for a 1-12 point win?

How do odds of $111 sound? Roosters +10.5 with Tom Trbojevic, James Tedesco, Daniel Tupou, Angus Crichton and Jason Saab to all score a try. This is a legitimate long shot that has a great chance to sneak home.