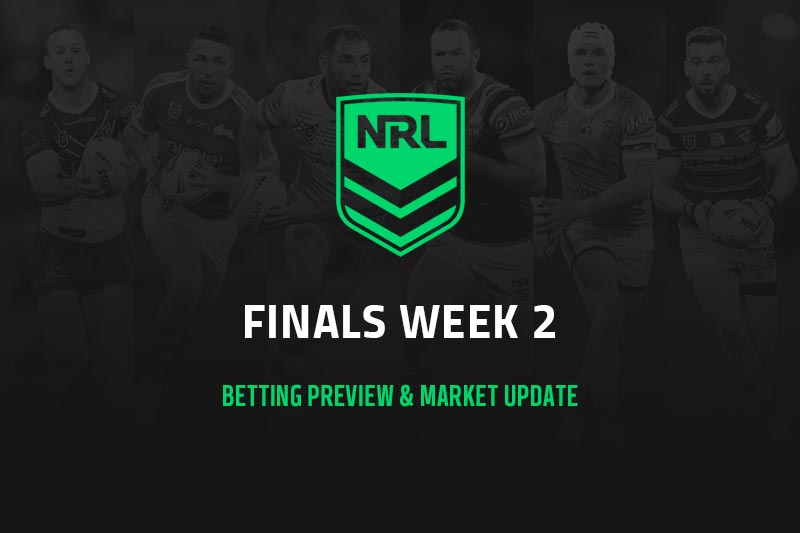 Week 1 of the 2021 NRL Finals Series produced some terrific football and some shock results.

The Penrith Panthers are now locked in to play sudden death footy in Week 2 after their 16-10 loss to South Sydney. The Rabbitohs as a $4 outsider produced one of their finest defensive performances to limit the Panthers to just one try, which came from a kick, and it has them into their fourth consecutive preliminary final where they will face either the Roosters or the Sea Eagles.

The Storm qualified for their seventh consecutive prelim after they thumped the Manly Sea Eagles 40-12 in a result barely anyone saw coming. Manly being that poor had their fans left with jaws on the floor, but the benefit of the top four will help them get back on the horse as they get the second bite of the cherry this weekend. Tom Trbojevic was contained brilliantly by the Storm defence, so will Roosters coach Trent Robinson adopt some of the same tactics to keep their improbable season alive?

Speaking of those Sydney Roosters, how on earth did they survive the scare the Gold Coast Titans gave them? A bust from Beau Fermor with just seconds left gave the Titans one last play to steal a win, but it ended in misery for the Gold Coast when Patrick Herbert’s final pass on the end of a backline shift went over the sideline and not into the hands of Corey Thompson. This game was expected to be a walkover, but it turned into one of the games of the season that had more twists and turns than a netballer’s ankle.

The Parramatta Eels booked their place in the second week of the finals with a 28-20 win over the Newcastle Knights. A penalty try to Will Penisini in the dying moments gave the Eels an insurmountable lead, but they will feel the effects of this win for several days due to the brutal nature of the game. A fast game played in 28-degree heat saw players under huge fatigue with 20 minutes to go, and it was the Eels’ yardage game and the kicking of Mitchell Moses that held off a dogged and steely Knights outfit.

After the blowout score of Friday night, the rest of the weekend was comfortably the best entertainment the NRL has produced for season 2021. Let’s take a look at how Week 2 lines up.

Can the Roosters get up for another week with the bare bones of a football side? First-choice hooker Sam Verrills has been suspended for a high tackle and will miss this game, meaning Ben Marschke or Freddy Lussick will be called upon as his replacement. They start the week as a $3.60 outsider with a +10.5 point handicap at the line, which is a hard margin to predict this far out. They were far from their best against the Titans, but they gave up at least two tries that were completely out of the blue, so realistically the defended better than the score line might suggest. To contain a Manly side who will be desperate to prove they are a better side than what they dished up against the Storm is going to be a huge step up in class. Manly have no real injury concerns coming into this game and are a hot $1.31 to bounce back and head to the preliminary final against South Sydney. It was alarming how poor their defence was, but it was pointed out post-game they have failed to defeat the Rabbitohs, Storm, Panthers or Roosters all season. Are they the real flat-track bullies? We will learn on Friday night.

A good old-fashioned western Sydney derby makes for a sensational Saturday night of rugby league. Penrith would never have envisioned playing in Week 2 of the finals, but they’ll need to rebound quickly. They only managed to score 10 points against Souths, which was the major shock for everyone who watched. The last time they only scored 10 points in a game was Round 5 in 2020… against their old rival Parramatta. Their match from earlier this season saw the Eels hold them to 13 points, which still might have resulted in a loss but it does show that perhaps Brad Arthur and the coaching staff have a few aces up their sleeves. Parramatta will come in as the $4 outsider but should fancy their chances, especially if Moses Leota and Dylan Edwards are able to get their injuries under control. The other factor for Parramatta will be how quickly they can recover from a brutal game against the Knights on a six-day turnaround.