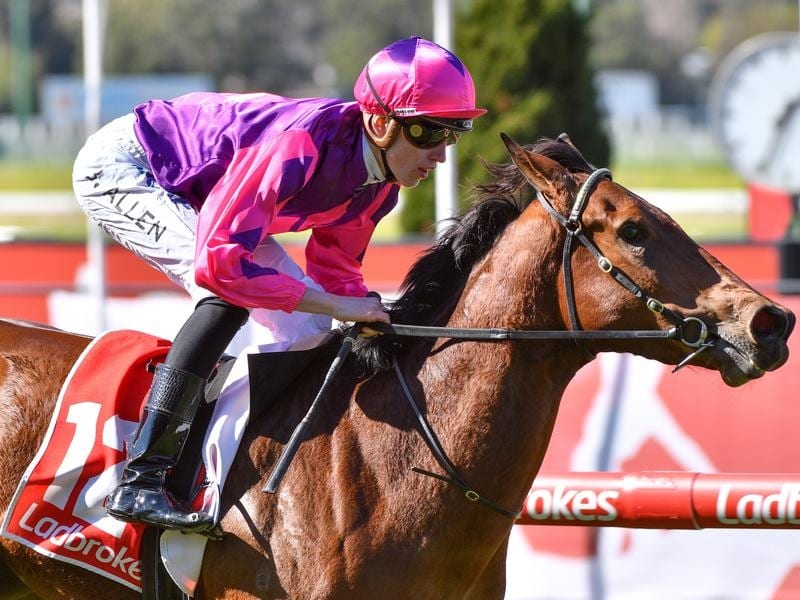 Sassy Salitage has made a winning transition to city racing with her victory at The Valley.

Sassy Salitage has risen to the challenge in her first city test at The Valley, upstaging a couple of Group-winning fillies to press her own spring claims.

The Greg Eurell-trained Sassy Salitage won a maiden at Pakenham on debut on August 1 before stepping up in class over 1200m.

Taking on a number of three-year-old fillies who have shown promise, Sassy Salitage sat outside leader Lady Lupino, a Group One Champagne Stakes placegetter last season, before taking over rounding the home turn.

“To come from Pakenham to here and do what she did today against this sort of field was an enormous effort,” Eurell said.

“It was always going to be a huge test for her today.

“She’s still very new and still got a lot to learn, as we saw in the run.

“I certainly think, experience-wise, she will benefit a lot from today but she has shown us good ability at home and I really liked her win at Pakenham.

“It’s always a big leap when you come to town and she was tackling a couple of Group winners.

“It was a good step up and I said to the owners we will know where we sit after this race, going forward.”

Having won two from two, Sassy Salitage is now likely to progress to the Listed Atlantic Jewel Stakes (1200m) at the same track in two weeks.

Eurell has nominated the filly for the Thousand Guineas (1600m) and said it would be interesting to see what distance range she gets to.