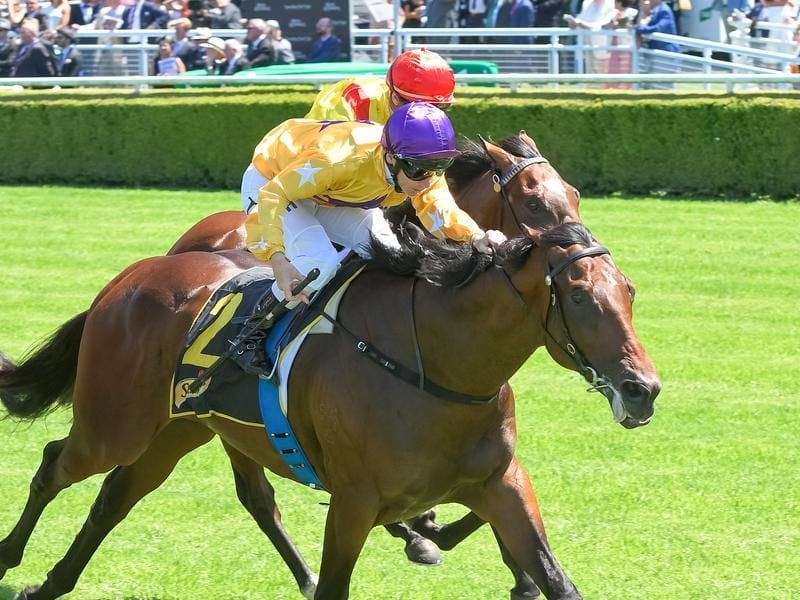 Santos goes to the Golden Rose off a one-run preparation but co-trainer Adrian Bott says he is fit.

After a luckless run in his seasonal return, three-year-old Santos will race on a seven-day back-up striving to give Gai Waterhouse’s Tulloch Lodge a first Golden Rose win.

The $1 million Golden Rose (1400m) at Rosehill was introduced to the Sydney racing calendar in 2003 and it has so far eluded Waterhouse who now trains in partnership with Adrian Bott at Randwick.

Santos made his return in last Saturday’s Listed Heritage Stakes (1100m) at Randwick and finished fifth but was blocked for a run in the straight.

“Unfortunately he just didn’t get a lot of luck,” Bott said.

“He got a nice run in the race but he just got held up and virtually went to the line untested.

“He’s come through that race in really good order and we’ve always thought a lot of the colt.

“I think he deserves his chance to prove himself at the top level.

“The blinkers seemed to have him focused in his last start and we’ve always been interested to see him stretch out to the distance of the Golden Rose.”

Santos raced five times as a juvenile for two wins including the Group Two Skyline Stakes before finishing down the track in the $3.5 million Golden Slipper in his final appearance as a two-year-old.

Santos was at $16 on race eve in the field which has been reduced to 10 after the scratching of Long Leaf who had drawn the widest barrier.

The Kris Lees-trained Graff was the $3.40 favourite while Group One winner The Autumn Sun ($3.90) is one of three strong chances in the race for Sydney’s premier trainer Chris Waller along with Run To The Rose winner Lean Mean Machine ($5.50) and Zousain ($7.50).

Bott believes Santos has the tactical speed to put himself in the right position to capitalise if he’s good enough on Saturday.

And despite the colt having had the one 1100m-race this preparation Bott does not believe Santos will lack anything on the score of fitness.

“He’s shown form around some of these horses previously and he’s a Group Two winner as a two-year-old,” Bott said.

“I think he’s improved on what we’ve seen from him at two and he’s still got further improvement to come as an autumn three-year-old.

“I think he can measure up.”