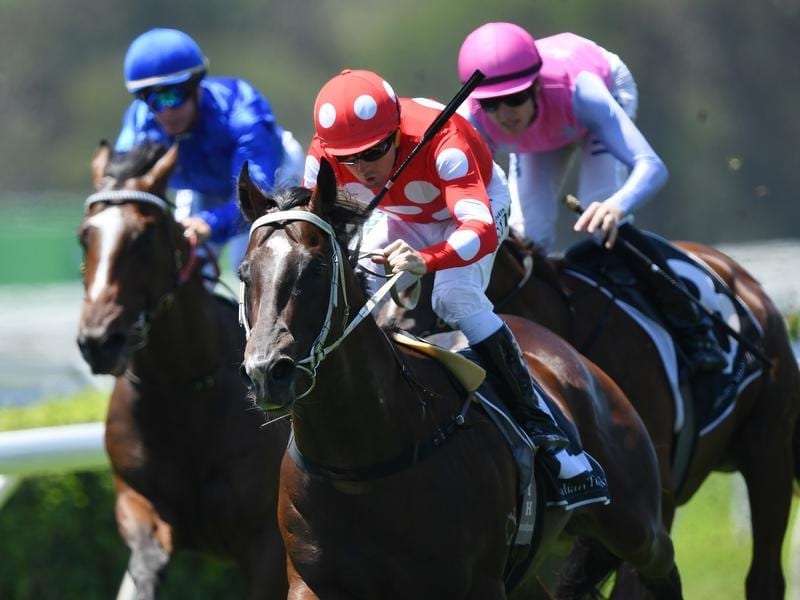 Sandbar (red) will take his place in the $1 million Golden Rose.

Trainer Brad Widdup has put Sandbar’s last-start fifth behind him and expects the colt be at his best in the $1 million Golden Rose.

Sandbar won the Listed Rosebud on August 11 but performed below expectations four weeks later in the Run To The Rose won by Lean Mean Machine from Graff with Jonker and Zousain third and fourth.

The Kris Lees-trained Graff is the $4 favourite for Saturday’s Golden Rose (1400m) at Rosehill with Sandbar at $26 ahead of Tuesday’s declaration of the final field.

“I think the track played against him last time and also the month between runs,” Widdup said.

“The track was heavy and even though he’s performed on soft tracks it was shifty that day which didn’t help.

“And the first four home in that race are four horses anyone would want to train.

“He will have a good gallop in the morning on the Hawkesbury course proper and then hopefully come up with a good barrier.”

The Group One Golden Rose (1400m) has a field limit of 16 plus four emergencies.

The Chris Waller-trained The Autumn Sun is the TAB’s second favourite at $6 ahead of stablemates Lean Mean Machine at $7 and Zousain at $9.

The first four in the market are the only ones under double figures.

Zousain was treated for an elevated temperature after the Run To The Rose and is expected to take his place.

Sandbar is raced by a group headed by Widdup’s main backer, Damion Flower who owned the colt’s sire Snitzel and has built the Platinum Park training complex at Hawkesbury.