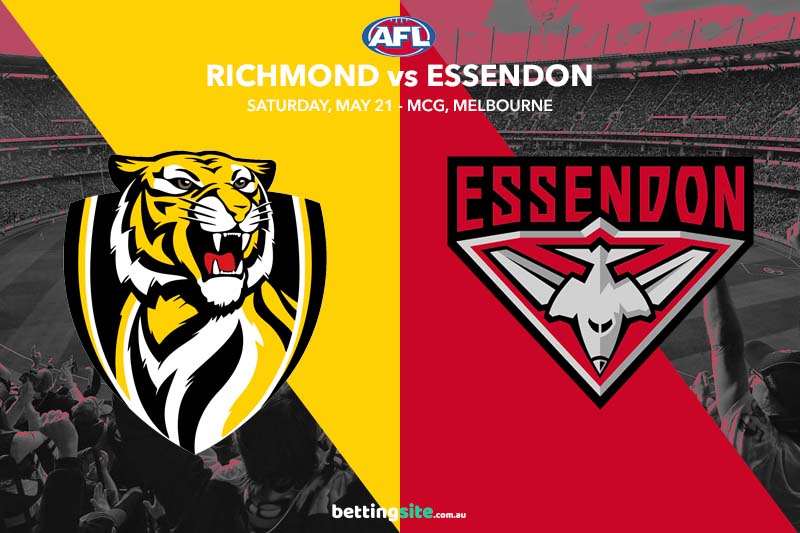 One of the biggest games on the AFL calendar is the annual Dreamtime at the MCG clash between Richmond and Essendon, which is building into a massive contest this Saturday night.

The Essendon Bombers have been torn apart by the media after their extremely poor effort against the Swans in round nine, which will fire up the players to come out and perform this weekend.

It will not be easy for the Dons to turn their situation around against the in-form Richmond Tigers, as Damian Hardwick’s men are playing some of their best football since the 2020 premiership.

Tom Lynch and Jack Riewoldt have been firing on all cylinders up forward for the Tigers, while the midfield mix of Dion Prestia, Jayden Short and Dustin Martin is functioning well with Toby Nankervis.

Marlion Pickett will unfortunately miss this Indigenous Round blockbuster after receiving a one-match suspension for a high bump, while Jack Graham may also miss out with a toe injury.

There is not much support coming back for the Dons following their big loss, as Jake Stringer and Kyle Langford are still sidelined with hamstring injuries, while Jye Caldwell is not a certain starter.

Players who can win a game off their own boot are very hard to find, but Dustin Martin and Darcy Parish are two prime examples playing this weekend. Both midfield stars thrive on the big stage and often perform well when their team needs them most, especially Martin with his three Norm Smith Medals.

Darcy Parish recorded a monstrous 44 touches in his last clash with the Tigers, which is starting to become a trend for the superstar in notable matches. Parish also had 44 disposals against the Magpies on ANZAC Day, so you know he will shine under the bright lights. Dustin Martin may not rack up as many touches, but his kicks are certainly bang-for-buck.

Richmond Tigers to win by 40+
We do not know where to rate the Bombers after their last couple of weeks, but we know what to expect from the Tigers. Key defensive cog Noah Balta has been sidelined with a hamstring injury, but that should not matter as the Tigers will win out of the middle and pressure the Bombers into easy turnovers. Richmond’s rapid ball movement across the ground will be too classy for the Dons to defend, resulting in another big final margin.

Richmond Tigers To Win By 40+

Dustin Martin to get 25+ disposals
Dustin Martin is a very good player, but his form against the Bombers is completely outrageous. Dusty has polled 18 Brownlow votes across his last eight matches against Essendon, which includes at least one vote in all eight contests and four best-on-grounds. Martin is back to his best following his 20-disposals and three goals against the Hawks. Expect big things from the all-time great this Saturday.

A massive performance from Dustin Martin will see the Tigers smash Essendon out of the park, while the current Coleman Medal leader in Tom Lynch will have his eye on another bag of goals up forward.
Richmond Tigers 40+ / Dustin Martin 25+ disposals / Lynch 3+ goals @ $8.82 with Ladbrokes