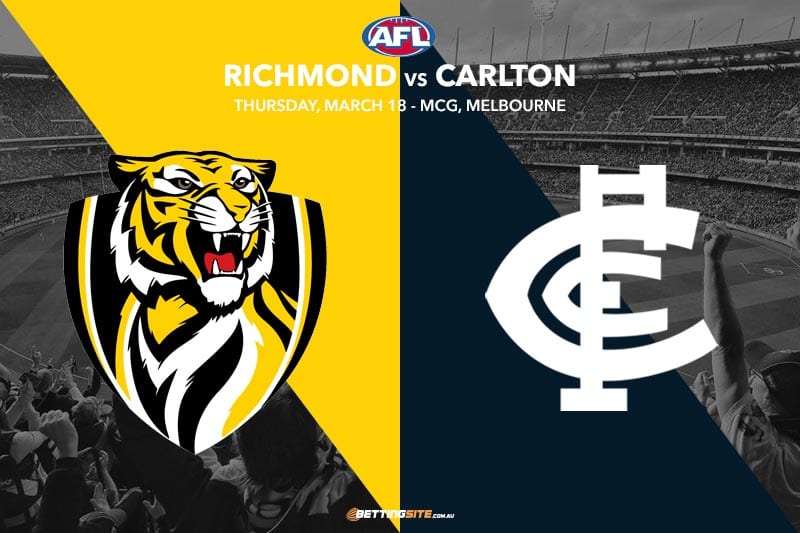 The footy is finally back, and what better way to kick off the 2021 AFL Premiership season than the now-traditional opening fixture of Richmond vs Carlton under lights at the MCG?

Richmond will play in front of their loyal Tiger Army for the first time since their 2019 AFL Grand Final success, meaning they will at last have the chance to unfurl their 2019 and 2020 premiership flags. If that doesn’t fire the Tigers up, nothing will.

The premiers come up against a Carlton side who are no longer the laughing stock of the competition and are pushing to play finals this year. However, the Blues have not beaten the Tigers since their meeting in the 2013 elimination final, so it is hard to go past Richmond as $1.33 favourites with online bookmakers.

The big brute forwards for both sides will be crucial in how the opening clash of the season plays out. Both are coming off limited pre-seasons, with Tom Lynch missing Richmond’s AAMI Community Series match with a toe injury and Harry McKay carrying an ankle injury that looked to have ruled him out of this clash.

However, both men will front up on Thursday night, and between the two of them you would expect a bag to be kicked with perfect conditions forecasted. Lynch is at coin-flip odds to kick three goals at $2 with Sportsbet.com.au. With 33 goals in 10 games against the Blues, he has only performed better against the Brisbane Lions over the course of his career.

The value may come from McKay, who is paying $2.63 to kick three goals of his own. He has only kicked two goals in his two games against the Tigers, but there is plenty of hype around the future star of Carlton and we are happy to be on that train too.

They are the two-time reigning premiers, coming up against a team that has not not beaten them in eight years. No wonder why Richmond are skinny favourites, but there looks to be some value at the 1-39 margin at $2.10 odds. The Tigers have shown in recent years they can be slow off the mark, as they have often struggled to put a decent gap on the Blues in round one.

Carlton are on the rise and should be competitive in 2021 thanks to some strong off-season signings. Richmond could be vulnerable late in the game due to the shortened pre-season, and we expect Carlton to stay close to them throughout the night. With the line set at +20.5, we are happy to take the $1.90 on offer.

On the back of a 32-goal season, Lynch will be looking to get the Tigers off to a strong start in his third year at the club. With odds of $8 available, it is hard to pass on him to kick the first goal of the night.

To get 20+ disposals – Will Setterfield

Will Setterfield averages 15.5 disposals per game over his brief career, but he crossed the 20-touch mark in four times in 16 outings last year. On the back of a big pre-season, the hard-bodied mid will be looking to start 2021 in style. Now that we are back to 20-minute quarters, the $2.20 for Setterfield to have 20 or more possessions is well worth a punt.

Richmond will not blow the Blues away first up. Dustin Martin will remind everyone he is the benchmark of the competition with a couple of snags, and Harry McKay will kick off his 2021 in style.