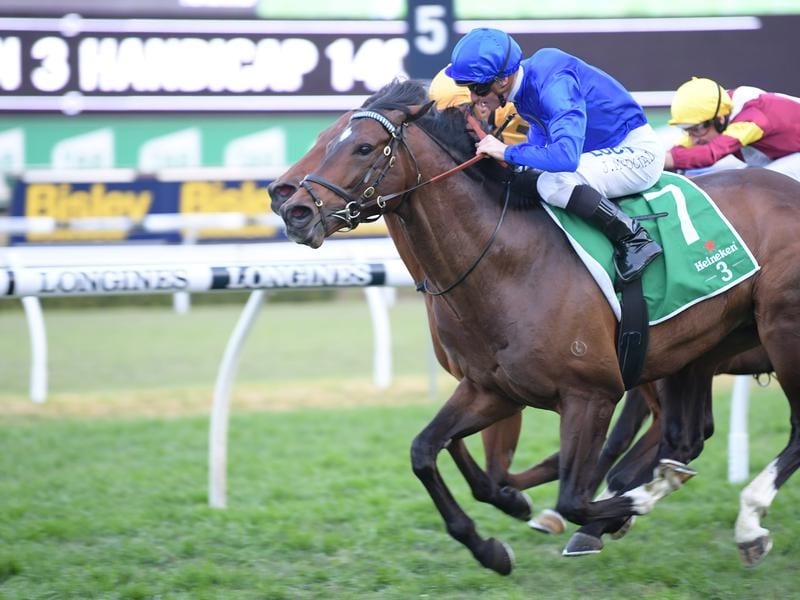 Best Of Days will be ridden by Nash Rawiller when the Godolphin galloper resumes in the Winx Stakes.

Nash Rawiller will don the royal blue of Godolphin when he makes his return to the Sydney Group One arena aboard Best Of Days, one of two runners for James Cummings in the Winx Stakes at Randwick.

A high-class field has been assembled for Sydney’s first major of the season headed by Godolphin’s Avilius, Australian Oaks winner Verry Elleegant and the ever-popular Happy Clapper.

Rawiller has wasted no time making his mark since his return to Sydney racing in July and last Saturday was at his brilliant and assertive best to land a winning double aboard Commander and Connemara on the Kensington track.

That strength and experience could be all-important for Best Of Days, who hasn’t raced since the Futurity Stakes at Caulfield in February when he ambled out of the barriers several hundred metres behind the rest of the field and was declared to be “left at the post”.

A Group One winner at Flemington in the spring, Best Of Days has obvious talent and impressed Rawiller with a recent barrier trial placing behind the speedy Samadoubt.

“I trialled him at Rosehill on the course proper and he gave me a lovely feel,” Rawiller said.

“He ran third in the trial but under a strong hold and he seems to have come back well.”

Best Of Days is considered Godolphin’s second-string runner behind early race favourite Avilius who captured the Group One double of the Ranvet and Tancred Stakes in the autumn.

Verry Elleegant is the most fancied of Chris Waller’s quartet and will be out to deliver her trainer a fifth consecutive win in the Group One race, formerly known as the Warwick Stakes, following the 2015 victory by Royal Descent and Winx’s three wins in succession.

Saturday’s Randwick program will also feature the return of highly-touted filly Libertini in the Group Two Silver Shadow Stakes (1200m) while Golden Slipper heroine Kiamichi kicks off her three-year-old season against the older mares in the Toy Show Quality (1100m).

Rawiller – who has six rides for six different trainers including evergreen sprinter Dothraki for Peter and Paul Snowden in the Group Three Show County Quality (1200m) – says he is relishing being back in the competitive Sydney environment and is keen to make the most of every opportunity.

“I’m getting some nice support and I just hope I can keep building on the nice form I’ve come back in.”