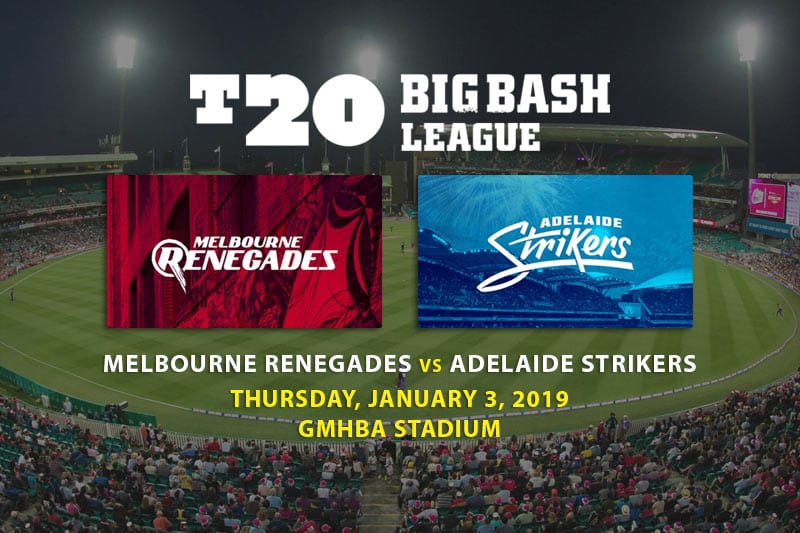 THE T20 Big Bash League returns to Geelong this Thursday with two teams that could really use a win.

Melbourne Renegades started the season with back-to-back victories, but they were well beaten by both Sydney Sixers and Melbourne Stars.

They cannot wait for the return of Aaron Finch, who is still away with Australia’s Test team despite a lack of form in the five-day game.

The ‘Gades bowlers could not contain Marcus Stoinis and the Stars last time out, with Dan Christian, Mohammad Nabi and Kane Richardson all going at more than 10 runs per over.

But Christian and Nabi have both looked good with the bat, while young opener Mackenzie Harvey is making a very decent fist of his debut season.

Adelaide Strikers also have two wins and two losses, but a better net run rate has them just ahead of the Renegades in fifth place.

Alex Carey and Colin Ingram were the heroes on New Year’s Eve, both hitting half-tons as the reigning champions downed Sydney Thunder.

Peter Siddle was the pick of the bowlers, claiming the big wickets of Jos Buttler, Callum Ferguson and Joe Root.

Rashid Khan played in that game despite his father’s recent death, and it is expected the Afghan star will suit up again at GMHBA Stadium.

The nephew of former Australia and Victoria allrounder Ian Harvey has enjoyed a very strong start to his Big Bash career, passing 20 in each of his two hits at the top of the order.

It was once thought that Carey’s batting might hinder his chances of national selection, but the wicketkeeper was brilliant last season and has started well again with two fifties in four games.

Accurate, economical and reliable, Boyce was one of the few Renegades bowlers who could walk away from the New Year’s Day derby loss to the Stars with his head held high.

Adelaide’s star spinner has taken seven wickets this season at an economy rate of just 4.68 and is without doubt the most dangerous man in one of the BBL’s best bowling attacks.

The Renegades are missing Finch in a big way, but the Strikers are likewise handicapped by the absence of Travis Head.

The defending champs have more runs up their sleeves, however, and their bowling unit is very close to the best in the BBL.

Follow the money and get on Adelaide to conquer Geelong.