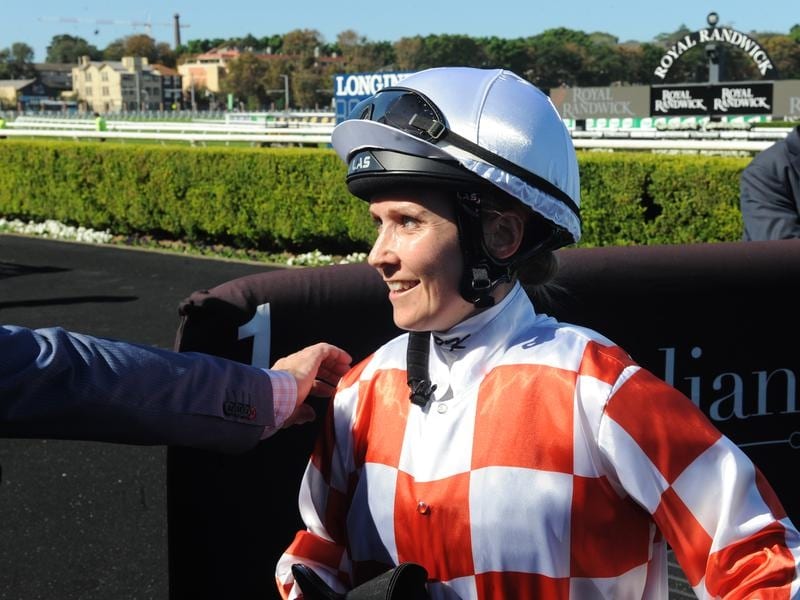 Rachel King has returned from injury for a winner at her first ride on Romantic Whisper at Randwick.

Rachel King has made her way straight back to the winners’ circle at her first ride back from injury, winning aboard Romantic Whisper at Randwick.

Last season’s champion Sydney apprentice and the winner of the Group One Spring Champion Stakes on Nakeeta Jane, King broke her collarbone in a multiple horse fall at Tamworth on March 11.

The injury ruled her out of certain big-race lightweight rides over the Sydney autumn carnival.

But she was back in business on Thursday, riding Romantic Whisper to an all-the-way win in the Light Horse Brigade Maiden (1400m) for her former bosses Gai Waterhouse and Adrian Bott.

“It’s definitely a good way to get the ball rolling again,” King said.

“Thanks to Gai and Adrian for trusting me knowing I was fit and ready to go.

“I’ve done three (collarbones) now and I’ve been pretty bored for the last six weeks so it’s good to get back to work.”

The Anzac Day program also featured two potential juvenile stars with the Anthony Cummings-trained Libertini taking out the Armistice Plate for fillies and Reloaded the Battle Of Amiens Plate.

Trained by Chris Waller, Reloaded was sent out the $3 favourite to win his debut in the equivalent race that kick-started The Autumn Sun’s career at year ago.

The Autumn Sun subsequently won the J J Atkins Stakes in Brisbane, the first of his five Group One victories.

The fifth and final Group One race for two-year-olds for the season is an option for Reloaded who is raced by a high profile group including Waller, Peter Tighe’s Magic Bloodstock, Neil Werrett and Rupert Legh.

Libertini, who is owned by Gerry Harvey, was having her second start after a second on debut in the Kindergarten Stakes.

Cummings said the filly would head to the Scone carnival in a couple of weeks before a decision on Brisbane targets.