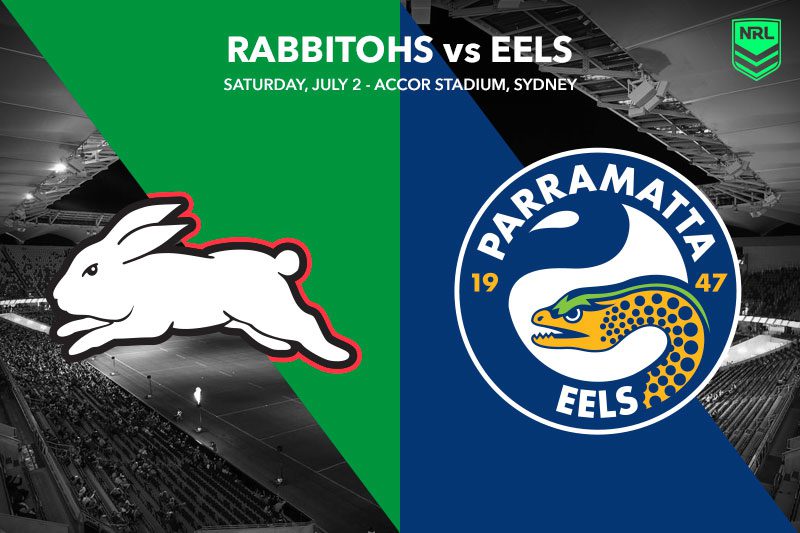 The headline act of Super Saturday in the NRL will be a huge clash between the South Sydney Rabbitohs and the Parramatta Eels.

Both have won three of their last five matches, but it’s the Eels who impressed in their last start with a terrific win over the Roosters before the bye.

By the time they take the field this Saturday, the Rabbitohs will have been forced to think about that horror first half against the Dragons for more than a fortnight, so how they respond will give a big indication of their fortunes for the remainder of the 2022 NRL season.

South Sydney will have Latrell Mitchell back on the field for the first time since round five following a bout with COVID-19 and a hamstring injury.

Many believe Souths’ ability to get anything out of their season rests on Mitchell’s ability to stay fit and healthy, and a big-time Saturday evening game against the Eels is a terrific test first-up.

The much-publicised benching of Lachlan Ilias in Wollongong is another fascinating sub-plot, as is whether Cody Walker stay calm and guide the team round the field.

With Mitchell’s inclusion, it will be the first time this year Souths have a full complement of players to select, and any excuses will fall by the wayside should they not aim up this weekend.

The good news for Souths is they’ve run up three scores of 38 and a 40-point barrage in their last four games against the Eels, so perhaps there are some old wounds they can re-open.

Alex Johnston at north of $2 in the anytime tryscorer market at BetOnline is just too hard to ignore, but it could also be worth backing Latrell Mitchell at $2.60 to score on return.

Parramatta played some of the most thrilling football seen in several seasons in their win over the Roosters, so having had a bye straight after a performance like that, will the magic have disappeared?

To play as freely and as magnificently as they did in the first half against the Roosters is extremely difficult to achieve at the best of times, but turning it on fresh off a spell feels like an impossibility.

The Eels could fall into the trap of believing it will just happen for them and, all of a sudden, they are 16-0 down and everyone starts screaming “PRETENDERS!” from the rooftops.

Parramatta will be desperate to prove they can be a real force this spring, but if Souths run up another score on them, they can forget about mounting any serious push for a premiership.

Maika Sivo is a skinny $1.88 to score a try, but at $8.50 to score the first of the match, you’d be better off just having a throw at the stumps for the bigger price.

The other nice value pick is the $4 for Dylan Brown to score for the Eels. The Kiwi five-eighth has been in terrific form and his running game will give the Souths defence huge headaches.

It’s about the two men in the six jersey. When Dylan Brown has space and can open up the defence, Parramatta look every bit a premiership contender. When Cody Walker does the same, Souths can run up a score on just about anyone. It’s absolutely pivotal for the fortunes of both clubs that these men have a big impact.

The upset pick of the Rabbitohs at the 1-12 margin is on. The old battle scars from recent matches, the fact Souths were embarrassed a fortnight ago and the Latrell Mitchell factor are enough to think the Eels won’t get the job done.