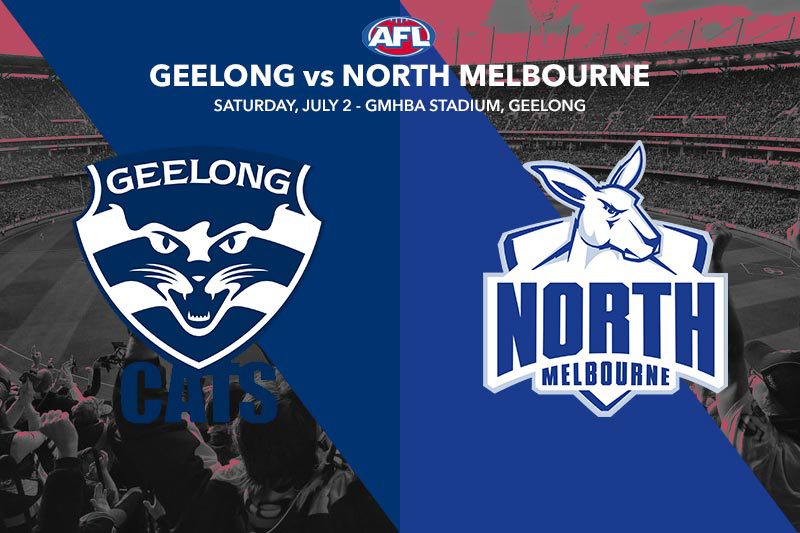 An out-of-favour North Melbourne squad will take on the Geelong Cats this Saturday night at GMHBA Stadium as round 16 of the 2022 AFL season continues.

The Kangaroos have been obliterated in their last 10 games consecutively, conceding over 100 points in each and failing to keep a margin below 40 points.

Chris Scott and the Cats have thoroughly enjoyed their last month of footy, having won five games on the trot against solid opposition including the Power, Bulldogs and most recently the Tigers.

Tom Stewart will have to sit out the next four weeks after his high bump on Dion Prestia, but the Cats are more than capable of covering his spot in the back half and continuing their run of form.

Bailey Scott will be the only forced change for the Roos after he injured his hip last weekend, while coach David Noble may choose to make more statements at the selection table following a disaster loss to the Crows in round 15.

The biggest matchup we could find in this contest will be the goalkicking competition between Jeremy Cameron and Tom Hawkins in the Geelong forward line. Cameron offers more mobility and endurance to get up and down the ground, while Hawkins is as good as anyone when it comes to marking the ball inside 50.

The Roos will struggle immensely with the barrage of inside 50s the Cats are going to serve up this weekend, which in turn will lead to plenty of goals to their key pillars. Ben McKay can only play on one of these superstars, and he is better suited to go with Hawkins deep in defence, leading to us choosing Cameron as the leading goalkicker. You can put your money towards either of the Geelong duo to kick a bag this week, but we recommend looking more at the former Giant.

You would have to be a brave soul to think North Melbourne might be a chance this weekend, as the Roos have lost 10 consecutive matches by over 40 points and start as massive underdogs this Saturday. The Cats have hit form over the last month and are steamrolling their way towards the top four, while the Kangaroos are heading in the complete opposite directions. Book in a big win to the Cats.

One of the hardest players to stop when they are on-song is Jeremy Cameron, who has already put together four matches this season with five or more goals. Cameron was unstoppable earlier this season against the Roos, kicking 7.3 in a dominant display. Nothing is stopping the superstar from kicking another massive bag in what should be a percentage-boosting game for the Cats.

Jeremy Cameron will kick a bag of goals, just as he did against the Kangaroos earlier this season, resulting in another big win the to Cats on their home deck. Aaron Hall ran amok last week for the Roos and should provide another spark this Saturday night.