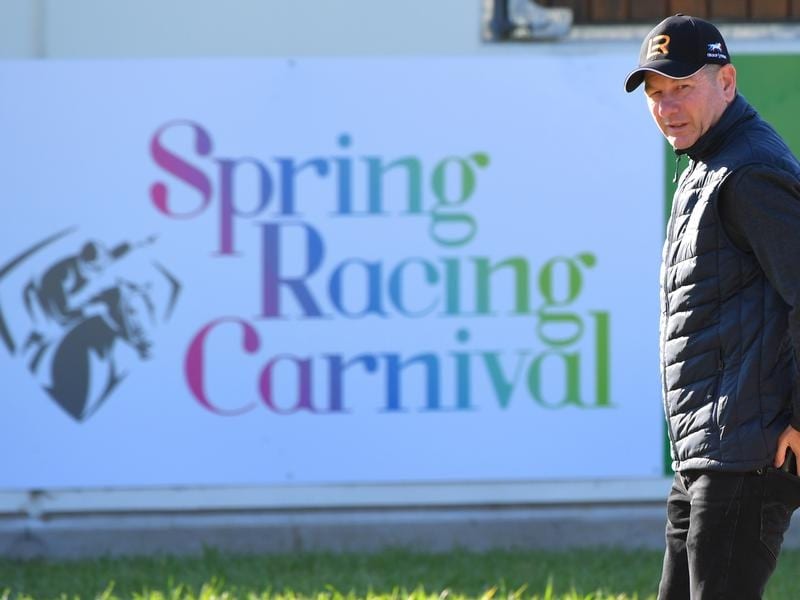 A 25 per cent share in the Kris Lees-trained Cups entry Mustajeer will be offered at auction.

A 25 per cent share in leading Caulfield and Melbourne Cups contender Mustajeer is to be auctioned ahead of the Ebor winner’s tilt at the Australian spring features.

Inglis will take bids through its Digital Online platform next Tuesday and Wednesday.

Australian Bloodstock have bought a controlling interest in Mustajeer who has been transferred to trainer Kris Lees with the 25 per cent share offered by Gaelic Bloodstock.

The former Irish horse arrived in Melbourne last week and Lees visited him at the Werribee quarantine centre on Wednesday.

“He’ll have a gallop towards the end of the week and again some time next week.

“Then he’ll go to Caulfield when he clears quarantine and stay at Clinton McDonald’s and have a gallop on the course proper on the Tuesday before the Cup.

“He’s a lovely looking horse that seems quite adaptable in his racing style, whether it’s forward or back, plus he’s performed on firm ground which he found in the Ebor and he beat home Prince of Arran who performed very well here previously, so I think he meets all the credentials,’

Mustajeer is a Group One placegetter in Europe behind Magical in the Tattersalls Gold Cup and split leading European stayers Master of Reality and Southern France in the Vintage Crop Stakes in April.

Damien Oliver has been booked to ride him in the Caulfield Cup.

“It’s also a great chance for someone to buy into a horse with Mustajeer’s profile, who is not only qualified for the Caulfield and Melbourne Cup, but is a live chance in both races,” Melmeth said.