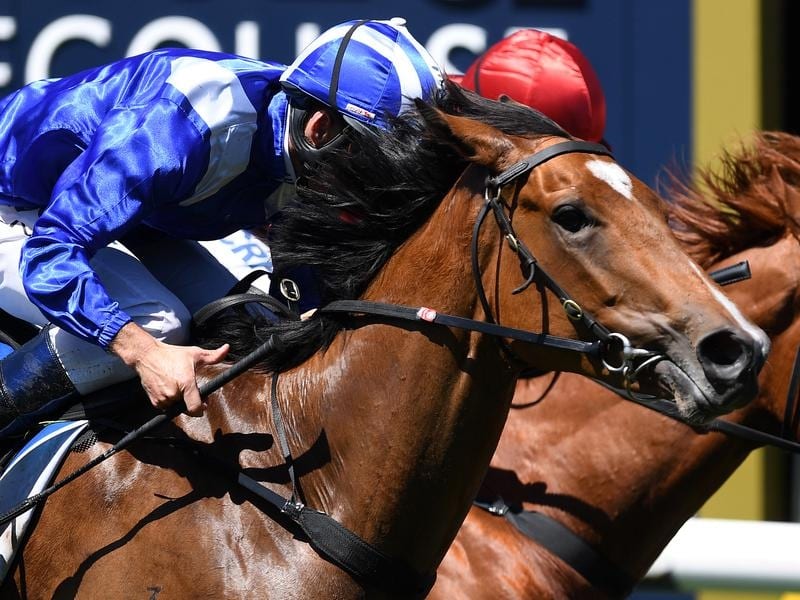 Qafila (left) will be the only filly in the Group One South Australian Derby at Morphettville.

After a luckless run in the Australasian Oaks, Qafila has been kept in Adelaide for another crack at a Group One win in the South Australian Derby.

Qafila was last approaching the home turn and was held up in the straight in last Saturday’s Australasian Oaks (2000m) before finishing fourth to Princess Jenni.

After seeing the way the filly came through the run her connections decided to run her again in Saturday’s SA Derby (2500m) at Mophettville in which she will be the only filly in the field.

“She would have gone close to winning if not run second.

“She has pulled up fantastic. She got held up most of the straight, so she hardly had a run.

“She has drawn a good barrier (7) this time. She has to race on the back-up. She is a pretty tough horse though so I think she will handle it.

“I think she’s a good chance of maybe getting that Group One or a Group One placing.”

Hayes said running Qafila in the Derby was always an option depending on how she performed in the Oaks.

“She pulled up so well out of the race that we thought, ‘why not have a go’,” he said.

Saturday’s race will be Qafila’s seventh attempt in a Group One with last week’s Oaks her best finish.

Hayes added that owners Shadwell Stud tended not to race their fillies beyond their three-year-old season and they were retired to the breeding barn.

“So we’re trying to get that elusive Group One,” he said.

Qafila has raced at 2500m when fifth to Aristia in last year’s VRC Oaks at Flemington, five days after finishing second in the Wakeful Stakes (2000m).

Already this season, three-year-old filly Sunlight has beaten the colts and geldings in the Group One Coolmore Stud Stakes for three-year-olds while Mystic Journey and Maid Of Heaven have won the Australian Guineas and Spring Champion Stakes respectively at the highest level.

“The fillies seem to have had the edge this season,” Hayes said.

“So you never know. She is the only filly in this race.”