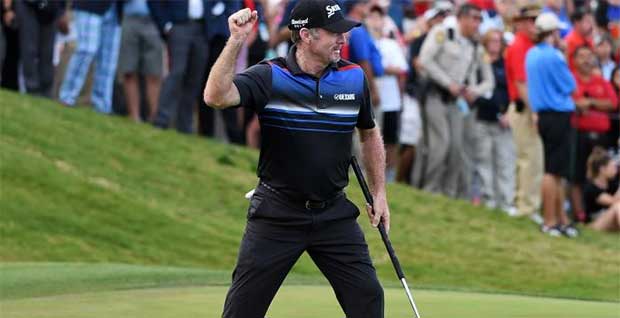 CAN lightning strike twice for Rod Pampling at the 2016 Australian Open?

The man who finished fourth in the tournament in 2015 after shooting a course-record 10-under on the final day has been the best-backed to win after recent success on tour.

Pampling is paying $21 to win the Open at Sportsbet.com.au and upset a superstar field – one of the best in the tournament’s history.

The Australian Open will return to the Royal Sydney Golf Club after a long stint in Melbourne and tees off on Thursday morning.

American prodigy Jordan Spieth is the $4 favourite, while Aussie star Adam Scott is nipping at his heels at $4.50.

Sportsbet punters believe Rod Pampling’s win in Las Vegas earlier this month was no fluke. The 41-year-old has found form at the right time and if his last 18 holes in the Australian Open are anything to go by, will be a serious danger.

Sportsbet’s Christian Jantzen thought the faith may be mis-placed.

“Rod Pampling turned back the clock in Vegas and it seems punters have become caught up in the fairytale,” he said.

Interestingly, one of Sportsbet’s worst results will be World Long Driving champion Jamie Sadlowski. The man who almost matches Happy Gilmore’s work off the tee is paying an incredible $751 and has had six punters back him in for a potential collect of $15,020.

World Long Driving champion Jamie Sadlowski has attracted six bets at the huge price of $751 including one stake of $20 for a potential collect of $15,020.