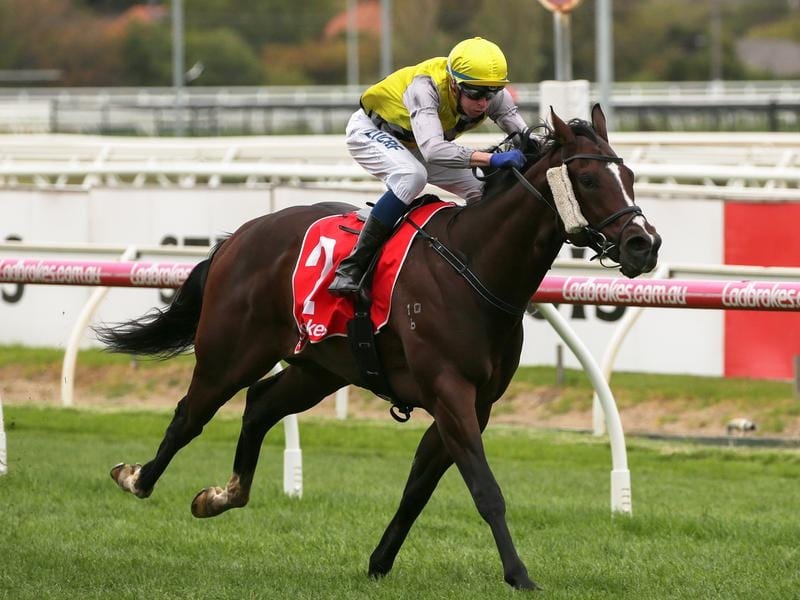 Michael Dee has navigated an inside passage to win the inaugural Showdown on Prince Of Sussex.

The horse Matt Laurie rates as the most promising he has trained has delivered on a plan in emphatic fashion to take out the inaugural Showdown at Caulfield.

Mornington trainer Laurie had aimed Prince Of Sussex at the rich race in recent months and after a dominant lead-up win in his second start at Bendigo the gelding overcame a few nervous moments to race to another convincing victory on Saturday.

Run for the first time this year, the Showdown (1200m) is open only to two-year-old progeny of Victorian-based stallions nominated for the VOBIS Sires Race Series, with prize money and bonuses of $1 million and a first prize of $500,000.

“I was asked early on after he trialled quite nicely and I flippantly said ‘The Showdown’ and we’ve had a bit of press ever since,” Laurie said.

“It has been a bit nerve wracking for me. He’s a very smart horse and people would have seen that he worked only fairly here on Tuesday morning but he’s a game day horse and you always get the feeling there’s a lot left in tank.

“And that was outstanding.”

Michael Dee had the choice of rides between the two favourites in the race and was confident he had made the right choice sticking with Prince Of Sussex over Sartorial Splendor.

Prince Of Sussex settled just worse than midfield and coming into the home straight Dee was forced to angle back towards the inside when he was not going to be able to get the $3.60 second favourite into the clear on the outside.

Prince Of Sussex quickly burst through between runners and then drew clear of Hightail ($20) in the final 100m to beat him by 1-3/4-lengths with another 2-3/4-lengths to Mishe Mokwa ($51) third.

Laurie won the Group One South Australian Derby with Escado in 2013 and has had other stakes winners but rates Prince Of Sussex the most exciting horse he has trained.

A son of stallion Toronado out of Il Diamante, Prince Of Sussex is likely to have a break with Laurie excited about his spring prospects.

“Obviously riding him quietly is the key and you can see he’s got a really strong finish,” Laurie said.

Dee said Prince Of Sussex was armed with an explosive turn of foot.

“There were a few nervous moments but lucky he’s a good horse and good horses like that can get themselves out of trouble,” Dee said.

“He will be even better next time in after he’s had a spell.”