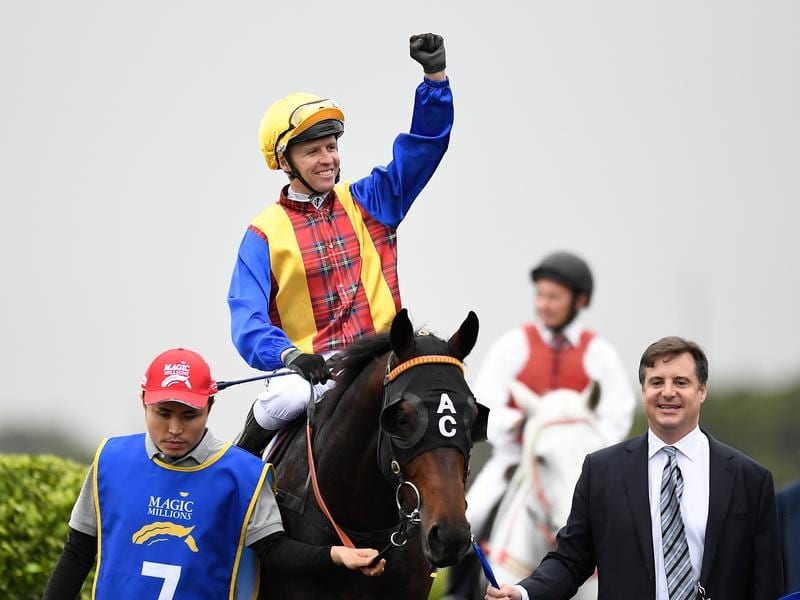 Group One winner Prince Fawaz is on the road to recovery and will be set for a rich spring target.

Injuries and ailments have been a recurring theme in the Anthony Cummings yard this year, hindering several of his star performers.

Prince Fawaz hurt his leg after finishing down the track in the Doncaster Mile, Libertini had a brief and underwhelming two-start autumn campaign before it was discovered she had an issue.

For Golden Eagle placegetter Mizzy, a strained muscle in her backside has prevented her even getting to the races this year.

They were a bunch of sore and sorry horses but with time and treatment, all are on the road back and Cummings is optimistic each can feature prominently in the spring.

A Group One-winning two-year-old, Prince Fawaz showed a glimpse of his best when runner-up to the now-retired Castelvecchio in the Rosehill Guineas.

Due back in the stable in August, the $7.5 million Golden Eagle is on his radar.

“If he comes back and is 100 per cent, he will be well and truly capable of being among the best of them,” Cummings said.

Libertini was one of the eminent sprinting fillies of her generation 12 months ago, claiming the opening two legs of the Princess Series and finishing third behind star colts Exceedance and Bivouac in the Coolmore Stud Stakes.

Her autumn efforts were below par but after a four-month break, Cummings will look towards a sprint campaign encompassing the Premiere Stakes in Sydney and Moir Stakes in Melbourne.

Mizzy continues to fly under the radar despite a hat-trick of victories in Group races last spring.

She has been off the scene since her Golden Eagle placing behind Kolding but Cummings is adamant she is a Group One horse.

“She has been sound and healthy for a while now. We have given her time and she will come back and repay,” he said.

The Randwick trainer also has a second tier team of burgeoning talents, including Something Fast, the winner of five of his 10 starts.

The five-year-old has struggled to get traction in his limited campaigns but has finally earned a benchmark rating high enough to qualify for some of the better races.

He is on an Epsom Handicap path while Cummings also has high hopes for rising three-year-olds Philizzy and Fayerra, both fillies having demonstrated promise during their juvenile season.