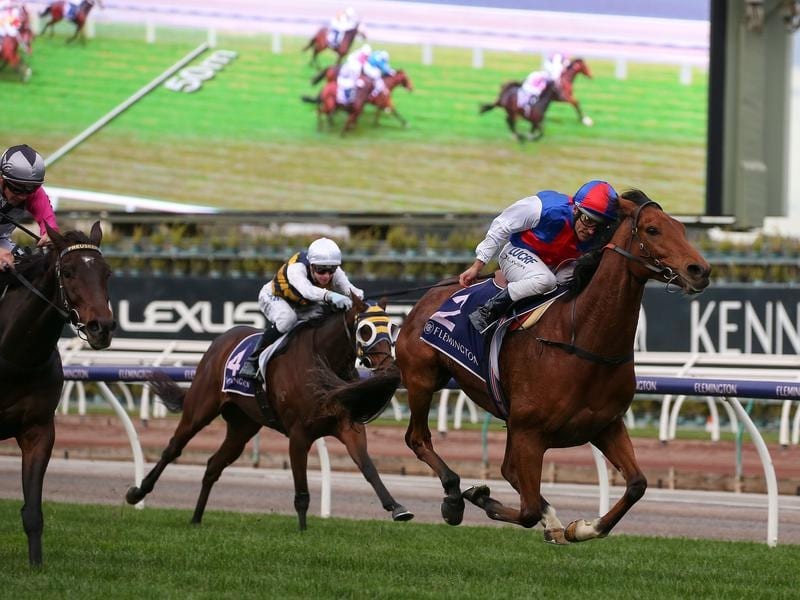 Locally trained Steel Prince (r) will try to repel the overseas brigade in the Melbourne Cup.

The Melbourne Cup dream is alive for connections of improving stayer Steel Prince who is set to be among the locally trained horses trying to stave off the international runners in this year’s $8 million race at Flemington.

Steel Prince, an import trained by Anthony Freedman, rose through the grades during an unbeaten autumn preparation, going from a benchmark-78 race at a midweek Sandown meeting in February to clinching a Melbourne Cup berth in the Andrew Ramsden Stakes in May.

This year’s Andrew Ramsden (2800m) at Flemington carried a golden ticket into the Melbourne Cup (3200m) for the winner, so Steel Prince’s narrow victory, which prompted jubilant scenes in the mounting yard post-race, has given his connections the luxury of having the horse’s target locked in for the first Tuesday in November.

“I know we can believe what it’s going to be like, but until the day it’s just going to be an amazing build-up,” Steel Prince’s part-owner Brett Griffith said.

“The main goal for Steel Prince is to peak on the first week of November.

“We’d like to think we’ve got one of the best staying trainers in Anthony Freedman training the horse, so fingers crossed he runs a big race.”

The first seven across the line in last year’s Melbourne Cup feature among this year’s entries with the Charlie Appleby-trained Cross Counter striving to become the first international to win the race twice.

Entries for the $5 million Caulfield Cup (3200m) were also announced on Thursday, with a total of 143 nominations including 25 internationally trained horses.

“Racing Victoria are really pleased that there is a balance between the quality of international runners and also the domestic runners,” RV’s chief handicapper Greg Carpenter said.

Weights for both races will be announced on September 10.

Six-time Melbourne Cup winning owner Lloyd Williams has a number of horses in the entries, both locally and overseas trained, and his son and part-owner Nick Williams believes last year’s beaten favourite Yucatan shapes as their leading prospect at this stage, with Homesman also another top hope from the locally trained brigade.

“Of ours I suppose Yucatan is probably our best chance,” Nick Williams said.

“He didn’t handle the wet last year but he’s going as well as ever. He’ll step out again in the next couple of weeks and I think he’ll be a really good chance.”

Email your resume and cover letter to [email protected]a.com.au