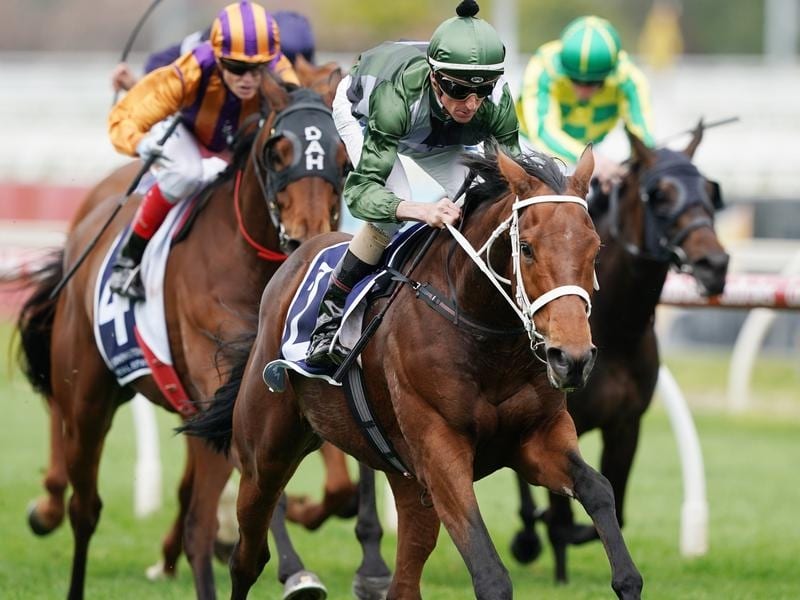 Irish import Shared Ambition has underlined his staying potential with a facile win at Caulfield.

Prominent jockey Nash Rawiller believes it is only a matter of time before promising Irish import Shared Ambition gets his chance in some better staying races in Australia.

The lightly raced Shared Ambition arrived in Australia in August, joining the Chris Waller stable, and made it two wins from as many starts since then with a soft victory against a small field in Wednesday’s Nick Johnstone Real Estate Handicap (2407m) at Caulfield.

The race was a benchmark-84 race on the middle day of this year’s three-day Caufield Cup carnival.

Sydney-based Rawiller thinks Shared Ambition has the untapped talent to potentially emerge as a Caulfield Cup runner in 12 months.

“He’ll be here in the Caulfield Cup hopefully next year,” Rawiller said.

“He’s got the right form from over there (in Ireland) and they’ve got a year to prepare him. So I’d be pretty surprised if he couldn’t aim at something like that next year.

“He’s got a lot of potential. He’s a lovely horse.

“He had class on them today and a terrific turn of foot.

“There’s a nicer race in him.”

Shared Ambition won two of his three starts in Ireland while Wednesday’s win added to his victory over 1800m in a benchmark-78 at his Australian debut last month.

Shared Ambition ($1.80) had runners all around him turning for home but Rawiller did not panic and once Shared Ambition got clear, the four-year-old was able to race to the front and beat Creedence by 2-1/4-lengths with two lengths to Exemplar third.

Waller’s Melbourne stable representative Jo Taylor was unsure of immediate plans for Shared Ambition but believes he is a classy stayer in the making who will be better next preparation.

“To be doing that over this kind of trip so early on in his first preparation in Australia speaks a lot to the class we’re working with,” Taylor said.