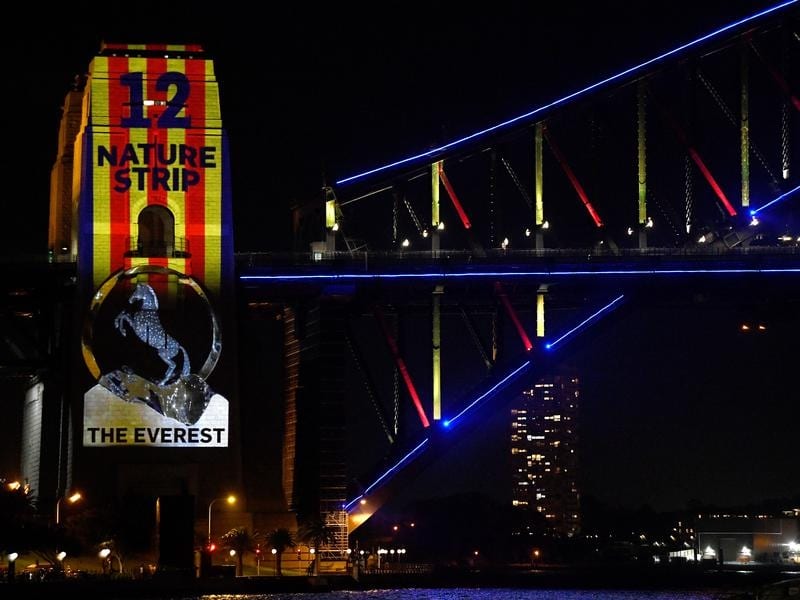 The Chris Waller-trained Nature Strip has drawn widest of 12 runners for the $14 million Everest.

On-pacer Nature Strip ($23) is tipped to dictate terms early in the 1200m race at Randwick despite drawing barrier 12 of 12 in the all-star field.

It’s where Waller wanted to be, allowing the two-time Group One winner to gradually find his stride and not over-race.

“He’s (Nature Strip) not the best of beginners,” he said on Wednesday after stablemates and fellow Everest runners Arcadia Queen ($5) and Yes Yes Yes ($9.50) galloped at Rosehill.

“If you draw barrier one and you’re half a length slow, especially in a race like The Everest, straight away someone will grab the fence and take your position.

“That’ll allow (jockey) Tim Clark to roll across gently (and) I would guess find the front.

“That way he’ll be in his own rhythm where he can just run his race without being fired up.”

Nature Strip jumped from barrier one last start to win the Moir Stakes, but his trainer noted he’d also come from gate nine of 12 in his other Group One triumph in the Galaxy Stakes over the autumn.

“He seems much more comfortable doing that,” Waller said.

“He’ll have to be going at a pretty high speed to cross an Everest field, but that’ll certainly be the plan.”

Clark was on the same page as Waller, welcoming the wide gate in a tweet on Tuesday night.

But punters still appear to have their doubts, either about the five-year-old gelding’s barrier or his stamina, as he drifted from $18 to $26 before slightly tightening to $23.

In his 18 career starts, Nature Strip has only travelled 1200 metres on three occasions and notched one win and two fourths in those runs.

Waller, an avid sports fan, drew on the Bathurst 1000 to emphasise the importance of keeping enough in reserve to stave off late-swooping back-markers.

“It’s a bit like Bathurst last Sunday where they were concerned about petrol,” he said.

“It’s no different to a horse race … you’ve got to converse energy. That’ll be in our thoughts when we’re talking tactics to Tim Clarke.

“But conserving energy and making sure you’re strong at the end of the 1200m distance is certainly going to be the key to winning an Everest.”