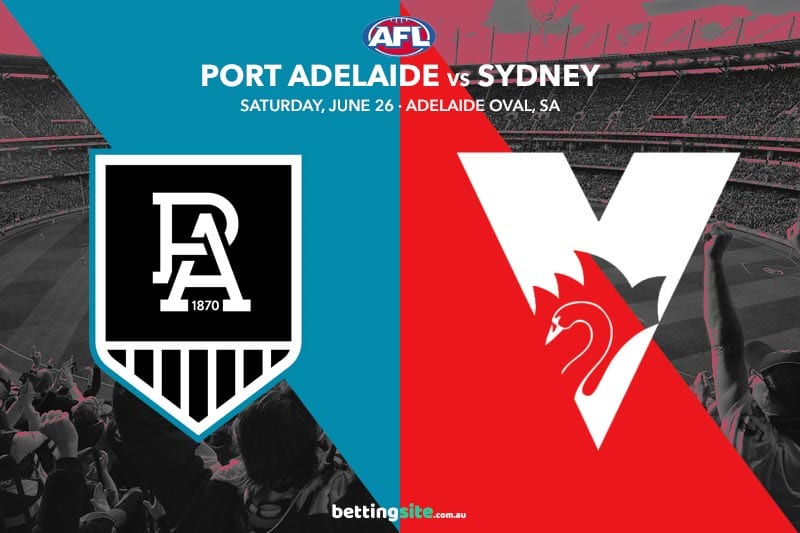 The Port Adelaide Power can jump inside the top four if they beat the Sydney Swans at the Adelaide Oval on Saturday afternoon in round 15 of the 2021 AFL season.

This match was originally scheduled for a 7:10pm start in Adelaide, but the time was pushed forward to 4:05pm in order to allow the Swans more time to fly in and out of South Australia, keeping them within the strict travel arrangements set by the state government.

Robbie Gray played his 250th match last week against the Gold Coast Suns, but his day ended early after suffering a knee injury that will see him miss the next eight weeks of the season. Young cult-figure Lachie Jones is also sidelined for at least four weeks with an injured hamstring.

Sam Wicks has accepted his one-match suspension after a high bump against the Hawks, but John Longmire’s Swans bat very deep and will easily cover the young forward. Chad Warner is a possible inclusion after he was rested before the bye.

The Swans’ position inside the top eight is far from secure, as their recent loss to the Hawks has left them vulnerable entering the final rounds of the year. The Power have won three of their last four matches and are starting to climb up the AFL ladder, but they need to start smashing opponents since have the lowest percentage of the top five teams.

Some of the Port Adelaide forwards are starting to heat up recently, which comes at the perfect time to cover for the injury Robbie Gray. Connor Rozee only kicked six goals form his first nine matches of the season, but the talented forward has kicked eight majors in his last two matches. Online bookmakers are still offering $2.37 for Rozee to kick multiple goals this week despite his brilliant form.

Big-bodied midfielders are starting to become more and more common throughout the AFL, but these two stars stand out above most others. Ollie Wines has put his name in Brownlow Medal contention following a recent purple patch of form, while Josh Kennedy has been a workhorse for the Swans for years.

Both these midfield bulls collect plenty of disposals each week, but we have our eyes on Kennedy this Saturday. The Swans star averages over 28 touches from his last four clashes with the Power, yet he is paying $2.25 with Sportsbet to get just 25 disposals.

Port Adelaide to win by 25+ points

The Power do not have a strong record against teams above them on the ladder, but they have been very strong against anyone below them. We think Ken Hinkley’s men will outmuscle the Swans across the entire ground, as they have a stronger midfield and their forwards are in excellent form. A big win to the Power is on the cards this Saturday night.

After slotting five goals against the Cats in round 13 and another three against the Suns last weekend, Connor Rozee should shine again this week. The former no.5 draft pick kicked three goals against the Swans in just his 20th career game, and we think that mark and beyond is very achievable this week while Robbie Gray is injury.

Connor Rozee will kick multiple goals for the Power and help them secure a big win over the Swans, while Josh Kennedy will be influential for the losing side. You can find these three legs at Sportsbet.com.au for $9.50.