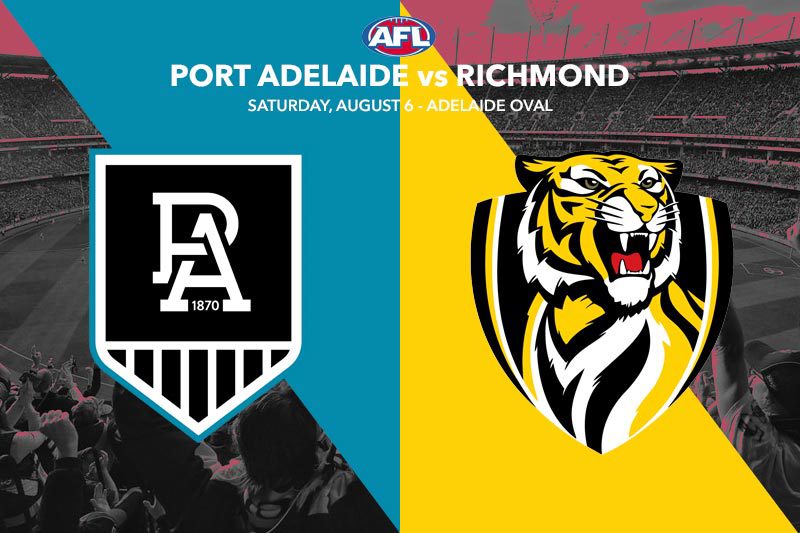 Can the Tigers keep their AFL finals hopes alive when they tackle the Power at Adelaide Oval this Saturday night in round 21?

Port Adelaide’s faint finals hopes died when they were pipped by Collingwood in round 20. Their disastrous start to the season was simply too much to overcome and they will finish the year in 11th or 12th position. Despite only posting a single win in their last five outings, the Power have posted some credible losing performances. They lost by six points to the Pies, 12 points to the Cats, 14 points to the Demons, and beat the Giants by 55. Not a bad run.

Port fans will look back on a season that could have been, because close encouraging losses are not rewarded with premiership points, unfortunately. The Power finished 2021 second on the ladder with a 17-5 record, and many pundits picked them as potential title contenders in 2022. In a competitive league such as the AFL, it is very easy to slide down the hill.

Richmond finally got the monkey off their back with a heroic come-from-behind win over the Lions in round 20. Richmond started cold and looked to have no chance through the first half of play. But they somehow found a way back, and at their sparkling best, Richmond look like September contenders. Perhaps this breakthrough victory can spur them on.

The eye-raising stat to emerge from their round 20 win was the number of 50-metre penalties the Tigers have conceded in 2022. With their coach mouthing off from the sidelines of the lower leagues, we need to ask – do the Tigers have a discipline issue? Will this hurt them further as they push for a finals tilt? Or will their ruthless and cavalier attitude prove irresistible in the end? We shall see.

Port Adelaide midfielder Zak Butters had a day out against the Magpies, grabbing 25 disposals, four clearances, and booting two goals. The 21-year-old looks to have the temperament to rise to the very top, especially with some solid pre-season muscle added to his young frame.

When the game against the Lions needed to be won, Richmond midfielder/forward Shai Bolton stepped up to produce the goods. Few players are as exciting with ball in hand, and Bolton has the ability to turn a contest on its head. He finished the game with 24 disposals, four clearances, and two goals, but the stats fail to capture the importance of his contribution. Richmond fans are dreaming of September upsets with the unstoppable Bolton and Dustin Martin leading the charge.

The Tigers go in as slight outsiders here, and we find ourselves with another contest between a team with everything to play for, and one with little obvious motivation. Perhaps punters are expecting Port’s frustration at a long and wasteful season to be unleashed. The line is set at a narrow 5.5 points, and we are obliged to back the Tigers. Their record of losing the close ones gives us a double bite at the cherry. They should throw caution to the wind, get runners pouring through the corridor, and hit Tom Lynch and Jack Riewoldt lace out.

For those that like to dabble with the exotics, we will be linking Richmond +5.5 points, into Jack Riewoldt 2+ goals, into Dion Prestia 25+ disposals. This combo will return $4.50 courtesy of Ladbrokes.