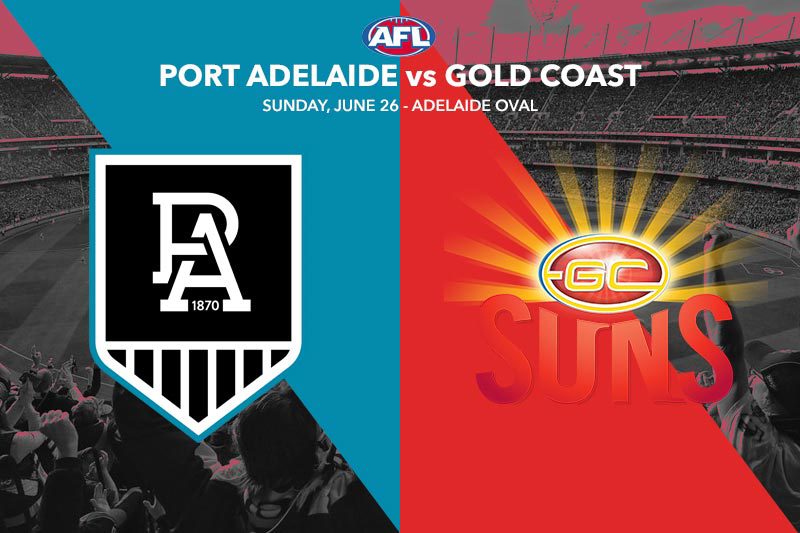 Port Adelaide will be looking to build on their upset win over Sydney when they host the improving Gold Coast at the Adelaide Oval this Sunday in the final AFL fixture of round 15.

Port have had an odd season. They started poorly, then got on a bit of a run, and are now winning every second game. The question is: are the Power set to continue this win-loss run here?

The Power’s victory over the Swans was built on a single quarter of dominance. Scores were locked at quarter and half time, but Port blasted six goals to one in the third stanza to secure the victory. Buddy Franklin was wayward throughout, returning a mere 1.3, which might have proven the difference. We are still not fully buying the Port resurgence story and would be tipping the Gold Coast Suns if they were at home.

Despite their relatively easy draw in recent weeks, there has been much to like about the progress made by the Suns. They have easily booted past the magical 100-point barrier in their last three outings, while also tidying up the defensive lapses that have cost them in seasons past.

The question remains whether they can consistently produce their best on the road, and this game will give us some answers. Morale and confidence are high, they go in with a potent forward line, and they should be able to match the Power across the field.

Young Port midfielder/forward Connor Rozee has made some nice strides this season. The 22-year-old was excellent versus the Swans, grabbing 29 disposals, five clearances, and booting a goal. There is much to like about the youngster, who is averaging 21 disposals and three clearances for the year. The lightly framed Rozee was runner-up in the 2019 Rising Star award and looks to be developing into a very handy player.

Young Suns midfielder Noah Anderson is having a prolific season. The 21-year-old is averaging an impressive 25.3 disposals, 3.4 tackles, and 5.3 clearances per game. Anderson polled eight Brownlow Medal votes in 2021 in just his second AFL season, so the sky is the limit for the rangy Sun.

Both Rozee and Anderson are increasingly determining outcomes with their silky skills and prodigious ball-winning. Tune in for the show.

The Power go in as warm favourites, but the line has been set at a skinny 13.5 points. The total points line is a low 153.5 points, so the online bookies are forecasting a tight, low-scoring game. We like the Suns to go close, but will that line be enough protection? We are going to head off the major markets and back the Suns on the first-half line, which is set at 6.5 points.

For those looking to profit more dramatically, we have linked some likely outcomes that will have you glued to the game stats sheet. We are linking the Suns +6.5 first-half line, into Levi Casboult 2+ goals, into Touk Miller 25+ disposals, which pays $4.54 at BetOnline. With any luck the Suns come out hot, Levi bags a couple of early majors, and we can go into Sunday afternoon cruise mode.