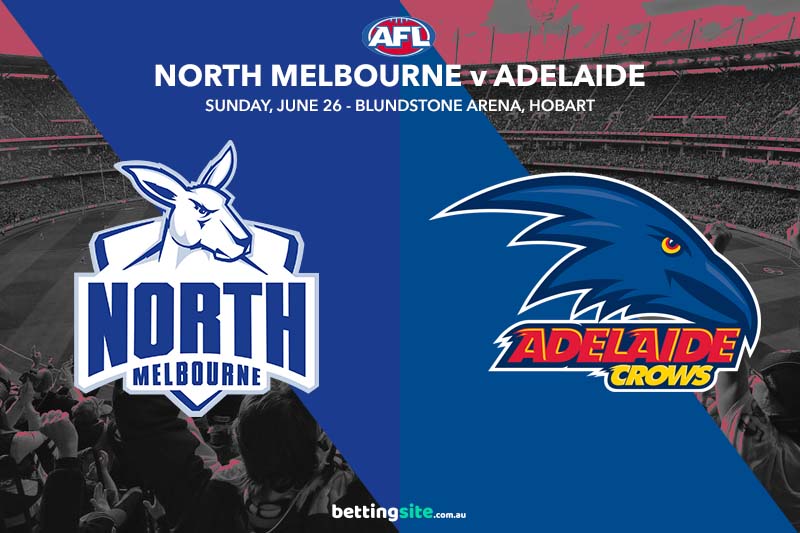 Although the North Melbourne Kangaroos and Adelaide Crows will not feature in this year’s AFL finals, they will provide an interesting contest at Blundstone Arena this Sunday afternoon.

The North Melbourne Kangaroos are desperately searching for a sign of improvement or positivity throughout their depressing season, as they continue to get rolled each week by whoever faces them.

Most Adelaide Crows fans would agree their season started well and has fallen off in recent weeks, which is why the team will be eager to knock off the Roos at their home away from home.

The Roos actually have a decent record when they play at Blundstone Arena, but the bookmakers still have them as strong outsiders after conceding over 100 points in 10 of their last 11 matches.

Even the Giants with Mark McVeigh as their caretaker coach smashed the Roos by 49 points in round 13, while the Crows are coming off a 43-point loss of their own last weekend against the Suns.

This battle of the battlers is going to be an interesting affair, as each side will be playing for premiership points as well as their own pride.

The best players in the competition are those that can hurt opposition teams with elite ball-usage, but when it comes to putting together a multi for any upcoming match, you do not mind going for the inefficient accumulators. Jy Simpkin and Ben Keays are both top-tier when it comes to picking up disposals, but neither are flashy by foot.

Both players are arguably the second-option amongst their respective midfield mixes, yet they each are averaging healthy disposal totals and know how to have an impact on the stat sheet. Keays is averaging just under 30 touches a game while Simpkin hovers around the 25-disposal mark. You can make some real money with the top AFL betting sites putting both of these players in your multi this weekend.

North Melbourne +18.5
The bye round may have come at the perfect time for the Roos last week, as their young players were given the chance to recover heading into a winnable outing, while a handful of talented players have also returned from injury such as Cam Zurhaar and Tarryn Thomas. The Crows may still win this matchup, but the Roos should make it a tight contest.

Tristan Xerri anytime goalscorer
Todd Goldstein moved back into the main ruck role when Tristan Xerri went down with an injury mid-year, which has forced Xerri to return as a full-forward in recent weeks. Although the large target has not kicked a goal since round 10, we think he is one who can stretch the Adelaide defenders and impact the scoreboard.

Expect Ben Keays to shine in the midfield for the visitors in what should be a low-scoring and scrappy affair, while Tristan Xerri puts through a goal up the ground for the Kangaroos.