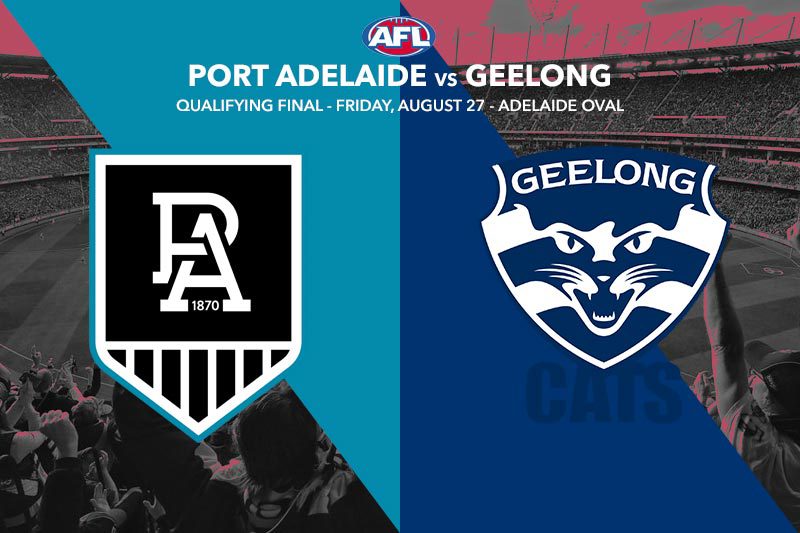 The 2021 AFL finals begin this Friday night with a hint of deja vu as the Port Adelaide Power take on the Geelong Cats at the Adelaide Oval.

The Cats gave away a 44-point lead to Melbourne in their round 23 clash, which cost them the minor premiership and their position inside the top two.

After knocking off the Western Bulldogs by two points at Marvel Stadium last Friday night, the Power earned the right to host the Cats in a qualifying final for the second consecutive year.

Port Adelaide’s main concern heading into this contest will be Mitch Georgiades, who suffered a light hamstring injury against the Bulldogs and is racing against the clock to play this week.

Mitch Duncan (knee) and Zach Tuohy (hamstring) could give the Cats a huge boost through the middle if they are cleared to play, but the pair will likely remain sidelined for another week.

The Cats triumphed over the Power earlier this season off the back of their star forwards as Jeremy Cameron, Tom Hawkins and Gary Rohan combined for 12 goals. Aliir Aliir, Tom Jonas and Trent McKenzie have led a fantastic Port Adelaide backline over the last month, conceding just 160 points in the final three rounds of the season. If the Power can keep Geelong’s forward trio quiet this Friday night, they will be a good chance to claim back-to-back qualifying final wins over the Cats.

Connor Rozee was everywhere against Geelong earlier in the season, kicking four first-quarter goals and eventually finishing the night with five majors. Rozee’s speed and size make him a difficult matchup for the Cats, especially now with Tom Stewart sidelined. Ollie Wines and Travis Boak were both influential in the round 13 win, and the undermanned Geelong midfield will have to work overtime to keep the two Power stars honest.

Ollie Wines finished the home-and-away season like a house on fire and now tops the Brownlow Medal betting market, but he faces a tough matchup this week. Cameron Guthrie is a bull in the contest, but he can also get on the outside and have an impact with his clean kicking. Wines is going at 32 touches per game and Guthrie is averaging 30, and both are posting better than five clearances per game, so we can expect them to be right in the thick of the action on Friday night.

Ken Hinkley’s men beat the Western Bulldogs last week despite a fruitless performance from Charlie Dixon, showing they do not need to rely on their star forward to win. Tom Stewart was one of the Cats’ best performers against the Power earlier in the year, and we think his absence will be felt this time around. With Geelong still waiting on a couple of guns to come back into the midfield, it looks as though Port Adelaide will advance to the preliminary finals for the second year in a row.

Connor Rozee has kicked more goals against Geelong than any other team in the competition, slotting eight majors in three encounters with the Cats. The third-year star is a nightmare matchup for opposition coaches with his blistering pace and aerial presence, while his work at ground level is exemplary. The loss of Tom Stewart once again comes into play, as he would have been the perfect matchup for Rozee.

We think Port Adelaide’s tight defensive group will get the job done against Geelong’s star-studded forward mix. Connor Rozee looks a good bet to add a couple to his goal tally against the Cats, while Cameron Guthrie is sure to find plenty of the footy.