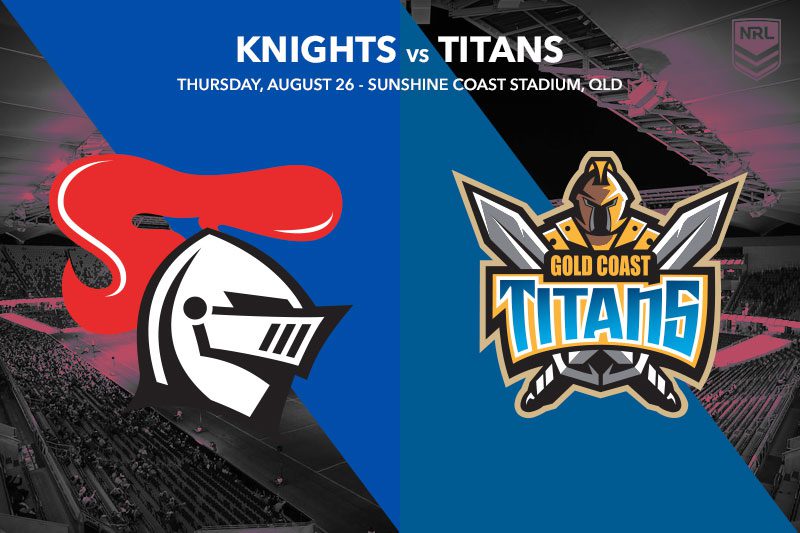 The penultimate round of the 2021 NRL season will kick off on Thursday night when the Newcastle Knights and Gold Coast Titans meet at Sunshine Coast Stadium. The Knights come into the game four points clear of the Titans in seventh position after four straight wins, but their poor differential means they still need to win at least one of their next two games to make the finals.

Newcastle were already missing Daniel Saifiti up front, and David Klemmer’s one-game suspension leaves a huge hole in their engine room after his superb performance against the Bulldogs. However, the Knights are gathering momentum at the right time of the season and should be buoyed by the perfect 5-0 record they have when Jake Clifford and Mitchell Pearce team up in the halves.

The Titans are in a do-or-die situation but can still make the finals despite having more losses than wins. A win in this game still leaves a small window where they can pinch seventh position from the Knights, but they’ll most likely be without Kevin Proctor due to a shoulder injury. Moeaki Fotuaika is expected to take his place in the team, but a difficult fortnight against the Rabbitohs and Storm has left them in a precarious position.

If there has been a bogey match for the Newcastle Knights in recent years, it’s travelling to the Gold Coast to play the Titans. They’ve been embarrassed in their last three visits to Robina, but does a change of venue to the Sunshine Coast mean a change of fortune?

One thing you can count on is the form of Enari Tuala in recent weeks, scoring seven tries in his last four games and scoring the first try of the match in three of the four wins. He should absolutely be in everyone’s betting slips, and taking him in either market is the way to go.

Kalyn Ponga was quiet against Canterbury, so can fans expect him to be back at his brilliant best? He hasn’t scored a try in Newcastle’s last three wins and feels due to cross the stripe, but perhaps just as an anytime scorer for this contest.

Newcastle are the $1.88 favourite and a big win just isn’t their style. The 1-12 margin is absolutely the way to go, or the -1.5 line if you feel like being on the safe side.

The Gold Coast Titans have given up 30 points in consecutive weeks to top-line opposition, so how does that equate to coming up against the 15th-ranked attack in the competition? Does it mean they have a lot of issues that are too late in the season to solve, or did they do extremely well to only limit those prolific offenses to less than 40 points in the ‘six again’ era?

It does feel like a toss of the coin job, and there is more than enough reasons to back the Titans at $1.95. They’ve had the knack of getting the better of the Knights in recent seasons, and the desperation of the situation makes them a dangerous opponent. Forget the line – take them straight up in the head-to-head market if you like their chances.

David Fifita dominated this game back in Round 5, and if he gets his tail up early in the game, he will be impossible to stop, which makes him a good outside chance of scoring another double. Jayden Campbell showed last week he can turn up from anywhere to score, and if the Titans are able to kick some bombs that force the Knights’ centres to contest, it could create some chances for Campbell to score again.

Newcastle’s defence in the last month has done a terrific job in periods to get the team into winning positions, there has been a trend of fading late and giving up points when the game looks won. The Titans have plenty of points in them and will throw more of a challenge at them than Canterbury were able to last week, so how does the Knights’ edge defence stack up against David Fifita?

Fifita scored a hat-trick when these teams played each other in Round 5 and dominated on the left edge, but he has spent more time on the right in recent weeks. That means Mitchell Barnett is going to have the big assignment of controlling that side of the field for the Knights and not letting Fifita destroy them again. Barnett has been fantastic in the last two weeks for the Knights, so his own personal form is peaking perfectly for a big show down that side of the field.

The Knights will chalk up their fifth consecutive win, and it will be decided by single digits. Newcastle in the last two seasons are 11-4-1 in games decided by under 10 points, and if they decide to roll the sleeves up, you can trust them to do it longer than the Titans. Gold Coast love playing touch football, but they aren’t built to grind.

Knights 1-12 with Enari Tuala and Corey Thompson to both score tries gets you a tidy $9.75 at Sportsbet.

Even odds. Knights 2 points clear so may drop off. Titans may benefit from being the only Qld team anywhere in the mix so look out for piggy back set restarts on the fourth. I’m tossing a coin 🪙