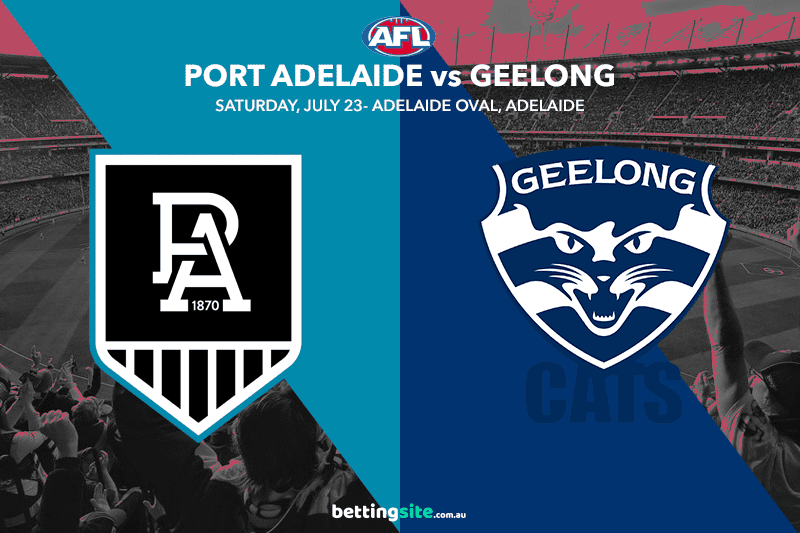 Port Adelaide’s tough late draw continues when they host the all-conquering Cats at the Adelaide Oval in round 19 of the AFL season on Saturday afternoon.

Port was very competitive against the reigning premiers in round 18, pushing the Demons across three quarters of tight footy. The Power led at half time, and it was only the late heroics of Kysaiah Pickett that beat them in the end. With the season reaching its pointy end and time running short, brave yet losing contests are not going to propel them higher.

Port Adelaide now sit one win outside the top eight, but with a poor percentage, so are essentially two wins short. They will need to keep on winning and hope that other results fall their way. A disastrous 0-5 start to the season may prove to be their undoing, but hope prevails at this point.

Meanwhile, the Cats are purring right now, and look like serious flag contenders after some impressive recent performances. After dispatching the Demons in round 17, Geelong taught the upstart Blues some footballing lessons in round 18 to score by an easy 30 points. Was it our imagination, or did the Cats look significantly taller than their opponents at every contest?

Geelong will be looking to keep the winning momentum rolling here, and it’s hard to find many holes in their line-up. The rapid development of youngsters like Sam De Koning and Tyson Stengle seemingly gives the Cats the perfect mix of youth and experience, and they should arguably be outright favourites with AFL betting sites to hoist the premiership cup based on current form.

When a team under-performs expectations, focus invariably falls on the goal kickers who are paid to impact the scoreboard. Port Adelaide key forward Todd Marshall has had a stellar year though, returning 36 goals across 17 games at an impressive 67.9% accuracy. The 23-year-old still has some muscling up to do but has the raw ability to forge a successful goal kicking career and Port would be wise to secure his long-term services.

In almost any other year, Geelong key defender Sam De Koning would be considered the standout rookie. The 21-year-old is a picture of defensive composure with the confidence to mark the ball over any opponent. Key position players normally take years to develop, but De Koning arrived with the tools to compete with the comp’s very best. Intercept marks are worth their weight in gold, and the kid knows how to deliver the goods. An epic battle of young guns is our key match-up.

The Cats are warm favourites here, but bookies are respecting Port’s home ground advantage and the desperation they might unleash with their season now at the crossroads. The line has been set at a skinny 9.5 points in what is expected to be a low scoring game. Students of form will be happy to take Cats without hesitation, but those that prefer to consider the psychological aspect of sports betting will be tempted to give Port a fighting chance. We have considered both angles and are sticking with the Cats to get the job done. Geelong -9.5 points is the tip, available at PalmerBet. The Power might throw everything at Geelong, but it won’t be enough.

Now that we have arrived at a solid play, it is time to tip some value into the contest. We will be linking Geelong -9.5 points into, Tyson Stengle 2+ goals, into total points over 155.5. This combo will return $5.38 courtesy of Ladbrokes.