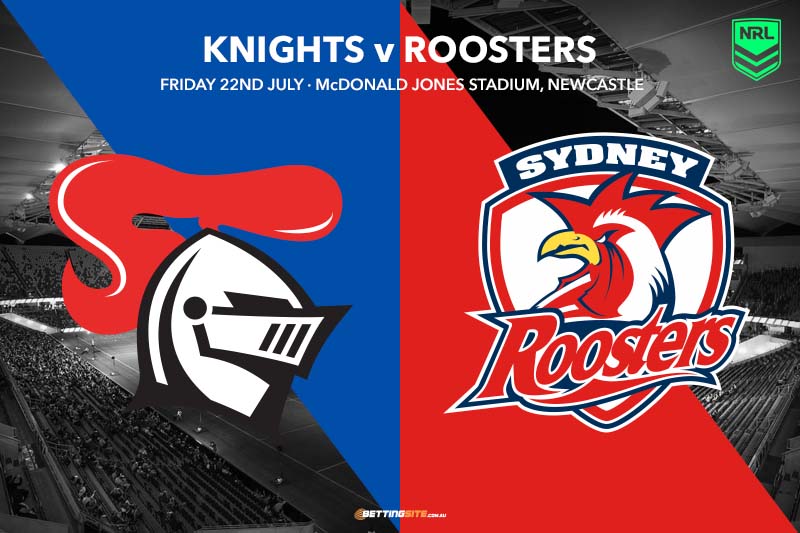 Friday Night Football continues in Newcastle as the Knights host the Sydney Roosters in round 19. The Roosters will be looking to take revenge on the Knights, following on of the great upset losses of the 2022 NRL season from Round One.

The Newcastle Knights season looks all but done, however, with a soft draw to finish the season, could push to try and inch the 8th spot on the ladder. The Roosters are one spot out of the 8th position but will need to beat five teams in the top eight if they are to push for a finish in the top four. The Roosters dismantled the Dragons last weekend, while the Knights were thumped by the Sea Eagles. Will it be the Knights or Roosters who have more to play for and go on to with this match?

The Knights have named young winger Dominic Young on an extended bench due to a foot injury but could be called in late to take the place of Hymel Hunt.

For the Sydney Roosters, the timely return of Luke Keary has pushed Joseph Manu back to the centres to replace the injured Billy Smith. In the forwards, Nat Butcher takes the place of Sitili Tupouniua, while Matt Lodge will make his club debut in place of Siosiua Taukeiaho.

The history of these two sides shows it’s almost one way traffic for the Roosters. Since 1998, the Roosters have won 31 of the 45 clashes. This is reflected in the betting and prices with Palmerbet, with the Roosters being heavily backed from $1.55 into as short as $1.28. With the likes of James Tedesco, Joseph Suaalii, Sam Walker and Manu in the side, the Roosters are hard to go past. Given the Roosters have won 70% of their matches in Newcastle, the value in this match is backing the Roosters to win by 13+ points paying $2.10.

Roosters captain Tedesco had one of his best Origin series without winning in recent months, scoring two tries two go with a line break and ten tackle breaks against the Dragons. Tedesco will be looking to put his side on his back as he did against the Dragons and lead the Roosters deep into the finals. Look for Tedesco to back up his strong performance last week with another try scoring double paying $7.

There is no player more destructive in the NRL in recent weeks and Joseph Manu. Scoring two tries to go with three line breaks, two line break assists, two try assists and a whopping 15 tackle breaks, Manu is close to impossible to tackle. Whether Manu lines up against Dane Gagai or Enari Tuala, the Knights will have their hands full in trying to stop him. Manu is almost guaranteed to score a try at any time during the match paying $2.25.

Given the star-studded side the Roosters will roll out on Friday night, and the fact that Queensland and Newcastle superstar Kalyn Ponga lines up too, this match is sure to be a high scoring one. The total points market is set at 42.5 points, which should be exceeded at the $1.90 price with the top Australian bookmakers.

The battle of these two fullbacks will be more interesting to watch than normal, given they have just faced off in an incredible State of Origin series. Ponga was named man of the match in game three, while Tedesco could well have won the Wally Lewis Medal in a losing side. Tedesco’s ball running and tackle breaking ability can’t be matched, nor can Ponga’s ball playing and creative ability. If the Knights are any hope of winning, Ponga will need to win this match up convincingly.