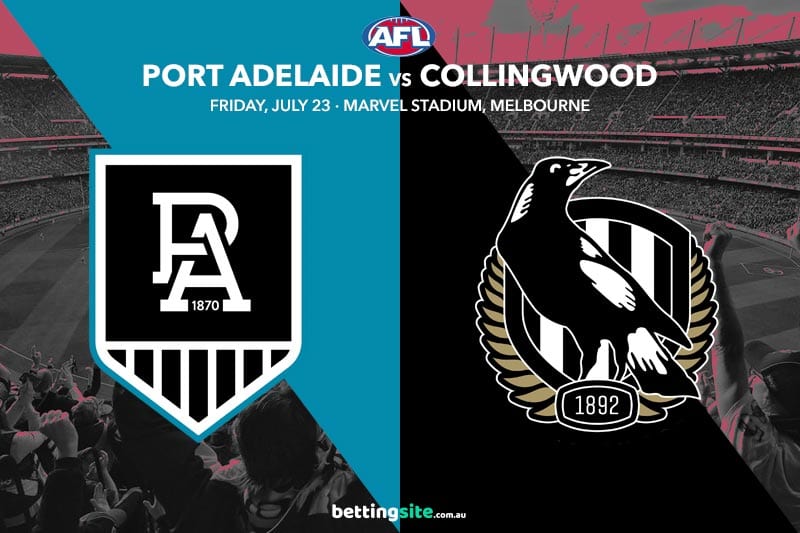 After another flurry of fixture changes, the Port Adelaide Power will now face the Collingwood Magpies at Marvel Stadium on Friday night in round 19 of the 2021 AFL Premiership.

The Power will celebrate Travis Boak’s 300th AFL game this Friday night, when they hope to knock over the Magpies and keep their spot in the top four.

These teams met back in round 10 just nine weeks ago, which resulted in a one-point thriller in favour of Port Adelaide.

Ken Hinkley is hopeful he can bring back all three young stars from the Power’s 2018 draft haul, as Zak Butters, Connor Rozee and Xavier Duursma are all eying a return.

The Pies confirmed two debutants during the week in Jack Ginnivan and Anton Tohill. Ginnivan is a crafty small forward and Tohill is a key defender, which the Pies will need against Port Adelaide’s tall forwards.

The Pies jumped the Power early in their round 10 contest and kicked the first four goals of the match, but Port flew home with a four-goal final term. Robbie Gray and Beau McCreery each kicked three goals in that clash, but both are sidelined this week.

One of the Power’s biggest strengths this season has been their flexibility, as a handful of players can play multiple positions to fill gaps in the side. Karl Amon was terrific last week, gathering 26 disposals and kicking two majors. Amon’s penetrating left foot is extremely dangerous around the goals, and we like the value about him to slot one through the middle this Friday at $2 with Sportsbet.

Two of the form players in the competition will meet under the roof at Marvel Stadium this Friday night as Ollie Wines and Jordan De Goey go head-to-head. The Pies have used De Goey in the midfield more than ever over the last six weeks, which has seen him average 31 disposals across his last four outings. We suspect both Wines and De Goey will surpass the 30-disposal mark this Friday night, but the best value comes from the explosive Magpie at $2.10 with the top AFL betting sites.

The Magpies played well against Carlton before half-time, showing glimmers of their potential. Although the Power have not lost to a team outside the top eight, we think they will struggle against the Magpies without Robbie Gray, who has been a huge contributor against Collingwood in recent clashes.

Jordan De Goey to get 30+ disposals

Now spending much more time in the middle, the no.5 draft pick from 2014 has collected 30 or more disposals in three of his last four contests. Jordan De Goey’s improved work rate has allowed him to take marks around the ground and rack up easy disposals, and he should do enough to pass 30 touches again this Friday.

The Magpies were unlucky to lose against the Power earlier in the season and will be out for revenge this Friday night. Jordan De Goey will lead the disposal count for Collingwood and once again surpass the 30-touch mark, while Karl Amon will impact the scoreboard like he did last week.