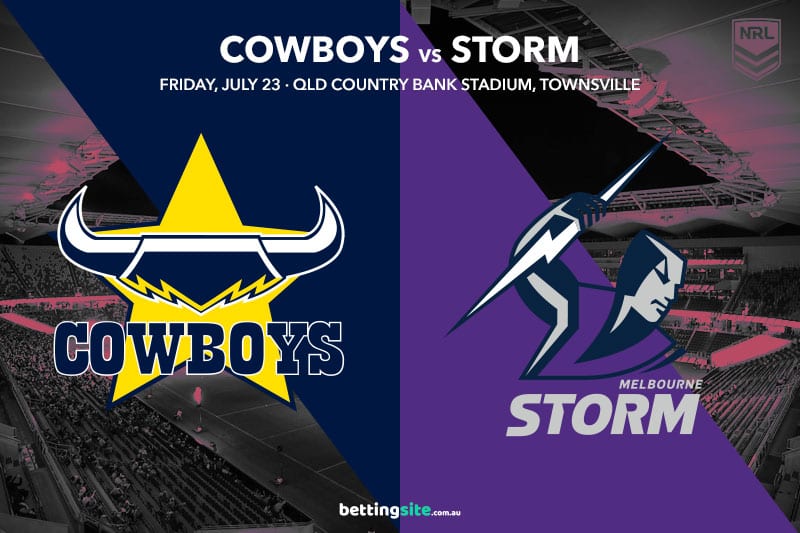 The North Queensland Cowboys will host the Melbourne Storm at Queensland Country Bank Stadium on Friday night in a match that comes with one of the most lopsided NRL betting markets of the season so far.

The $13 on offer for the Cowboys is one of the largest prices for any team in a head-to-head market this year, and the line has already moved from -24.5 out to -26.5 points.

The Cowboys will have a debutant on the wing in Kane Bradley, while the Storm will welcome back Christian Welch, Josh Addo-Carr and the excitement machine Ryan Papenhuyzen, who hasn’t played since Magic Round as he has slowly recovered from the effects of a concussion suffered against the Dragons.

Cameron Munster will be rested by Storm coach Craig Bellamy for this game, and Dale Finucane will also be given a spell after he failed a HIA against Newcastle.

Five straight losses for the North Queensland Cowboys have seen a promising season at the halfway point turn into a slow, uninspiring march towards the finish line. One bright spot has been Hamiso Tabuai-Fidow, who produced a stunning performance against the Roosters in a losing effort. His 274 metres gained, two linebreaks and one try followed up a try on debut for Queensland, so how he goes up against the Storm will be a must-watch for NRL fans.

Tabuai-Fidow is a crazy $3.75 to score a try at any time, which feels like fantastic value even on a night where North Queensland are expected to be beaten badly. So, what if the Cowboys start well like they have in their last two games before fading? The $26 for him to score the first try could be worth thinking long and hard about.

Incredibly, the Melbourne Storm have covered the line in every win on their 14-match streak, and you can bet punters will absolutely take on the -26.5 for the $1.90 return. Since losing the 2015 preliminary final at home, the Storm have won 11 in a row against the Cowboys, showing they clearly hold a grudge and love nothing more than avenging that loss.

One market that might need to be seriously looked at is the $8.50 on offer for the Cowboys to be held scoreless. The Storm already have two clean sheets this year, against the Roosters and Rabbitohs, so they are more than capable of holding a team currently in 13th on the ladder to a goose egg.

Josh Addo-Carr is the favourite to cross the stripe first at $6, which is absurdly skinny, but the better value might be Nicho Hynes at $11. His form has been tremendous since moving to the starting fullback role, but with Papenhuyzen returning, he will be looking to make the most of his limited time left in the no.1 jersey.

The great West Indian cricket teams of the 1970s and 1980s had a theory that if you cut off the head of the snake, the body will die. Melbourne did that to perfection in the 2017 NRL Grand Final by making Jason Taumalolo’s life a living hell after he had run wild over all comers in previous weeks.

Many believe Taumalolo is the best forward to ever play the game, and his influence for North Queensland can be seen as soon as he is interchanged. For the Cowboys to have absolutely any chance of making this game a contest, Taumalolo is going to have to completely dominate proceedings.

Christian Welch is most likely going to be the Storm forward who takes it upon himself to follow Taumalolo like a hawk and try to make life difficult for him. If Welch gets under the big Kiwi’s skin, it is hard to see the Cowboys making any headway.

There is no universe in which this game is a close contest. The Storm will cover the -26.5 line and claim their 15th win in a row, moving one step closer to talking about the best all-time winning streaks.

Storm -26.5 with Josh Addo-Carr, Nicho Hynes, Justin Olam and Hamiso Tabuai-Fidow all scoring a try at any time gives you a very nice $29 price.