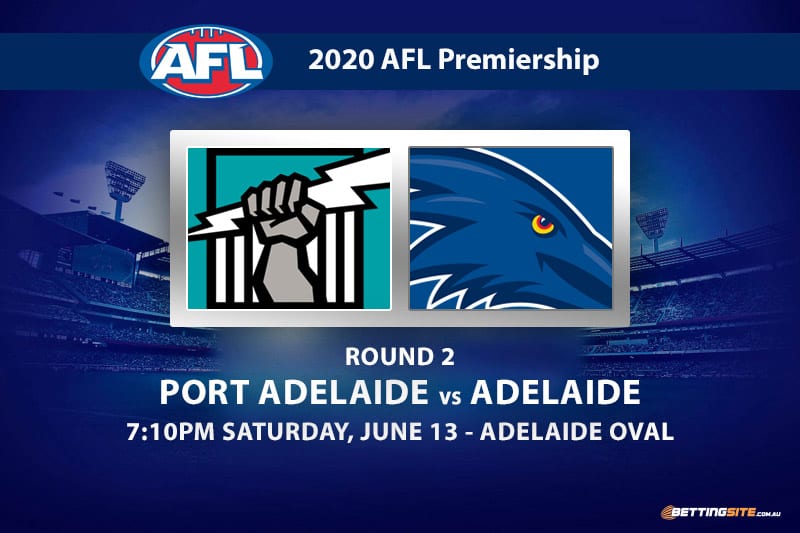 The fierceness of this rivalry is second to none, yet the two clubs joined forces in a successful push to allow around 2,000 fans into the game.

There is no bigger talking point in the lead up to this clash than Ollie Wines, who may be forced to sit out due to a club suspension for breaching COVID protocols.

Wines was interviewed by Channel Seven on the front lawn of his house on Wednesday, thus breaching rules to forbid players from inviting guests to their houses. He is currently under investigation and will know his future by Thursday night.

A training-ground brawl involving Kyle Hartigan and Billy Frampton raised eyebrows during the week, but Adelaide is adamant its players are simply excited to be back in the action.

This 2020 SA Showdown will be like nothing we have seen before, but who will be the victor?

Dan Houston was unleashed into the middle of the ground to great effect in 2019 and will spend even more time on the ball this year. He has accumulated at least 20 disposals in three of his last four clashes with Adelaide, so the form lines are good.

A heavy blow to the chest saw Smith play limited minutes in round one, but the rangy half-back is ready to go against his bitter rivals. An excellent kick with a good footy brain, Smith tallied at least 20 disposals in seven of his last eight matches in 2019 and will have plenty of chances to find the ball on Saturday night.

Everybody loves a young key forward that flies at the footy, and the Power have found a winner in Mitch Georgiades. Going at pick 18 in the 2019 AFL Draft despite missing most of the year through injury, the West Australian prospect kicked two goals and went for every incoming ball in round one. Sportsbet has Georgiades on the seventh line of 2020 AFL Rising Star betting.

Although the Adelaide forecast does not look clear, Darcy Fogarty is the best bet to kick a couple of goals for the Crows. Another young key forward, Fogarty has shown a willingness to attack the footy and impose himself on the contest. He will be the top target inside 50 for Adelaide and should slot a couple of goals.

This is the type of scenario where an explosive player will have plenty of flashy moments that stick in the memory. Connor Rozee is more than just a flashy player; he is a certified gun that can make things happen at ground level and in the air. Combining his elite speed and endurance, Rozee will make a big impact despite the shortened match time.

If you caught the first half of Port Adelaide’s match against the Gold Coast Suns back in round one, you would understand that the Power move the ball well and have created a good system with their available list. Ken Hinkley needs to get this team to the finals to keep his job, and this win will be the next step in that journey.