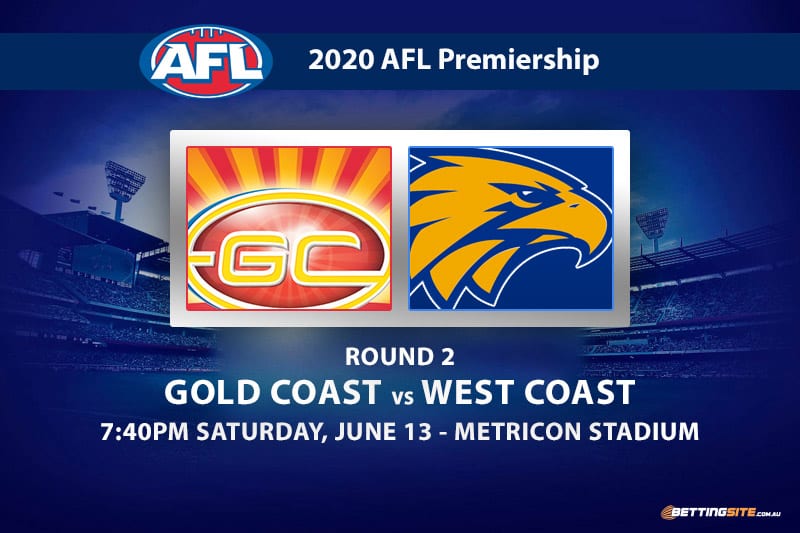 It’s a battle of the coasts at Metricon Stadium this Saturday night as the Suns play host to the Eagles in round two of the 2020 AFL Premiership.

Although these two sides are on completely different timelines, it will be interesting to see how they fare against each other when the season relaunches this weekend.

Round one did not go to plan for the Gold Coast Suns, who were thoroughly embarrassed by Port Adelaide at Metricon, but coach Stuart Dew is hoping the return of several senior players will help his cause.

Jarrod Harbrow, Pierce Hanley and Alex Sexton are big ins for the Suns, but David Swallow will miss through suspension and Brandon Ellis could sit out with a calf issue.

The West Coast Eagles are happily hubbing in their Gold Coast resort, but any sort of casual play could see the Suns jump them in the first quarter.

Nic Naitanui and Jarrod Witts will make for an interesting clash in the ruck, as Witts will look to use strength and skill to counteract Naitanui’s legendary leap.

This game is considered the easiest to tip this week, but there’s more to footy than just picking a winner.

The suspension to David Swallow leaves a void in the midfield for a big body, which is exactly what the Suns were looking for when they acquired Hugh Greenwood in the trade period. The former Crow was decent in his Gold Coast debut with 18 touches, but we should see that output lift as Greenwood takes on a more prominent role against the Eagles.

Lots of wingmen try to emulate what Andrew Gaff produces week in, week out. The incredible runner has made a name for himself as an ultra-consistent player that can rack up plenty of disposals. Expect Gaff to cash in whenever he has a less experienced Sun matched up on him throughout the game.

If you haven’t watched many Gold Coast matches in the past two years, you might have missed the rise of Alex Sexton as a genuine forward gun. Sexton kicked 39 goals and 29 behinds in a team that won only three games in 2019, so he should find a few scoring opportunities even if the Suns are blown out of the water this weekend.

Dom Sheed showed off his shooting skills with that famous clincher in the 2018 AFL Grand Final, and we think the Eagles will utilise his accuracy even more this season. With two goals in the opening round and 16 from his 24 games last season, it is time to start cashing in on Sheed’s forward prowess.

The West Coast forward line is loaded with quality scoring options. Even if a tropical storm were to brew before or during the match, the Eagles have enough talented smalls to dominate in the wet. Expect Liam Ryan and Brendon Ah Chee to be dangerous at ground level.

As much as we want to believe the Suns are getting better and won’t be a push over, they are coming up against the 2018 premiers and one of the favourites for the 2020 flag. If the likes of Luke Shuey, Tim Kelly, Andrew Gaff and Nic Naitanui don’t dominate this game, it would be a huge shock.